Die By The Blade

Buckle up friends, this is a long one. Mostly history, and an invitation for your own take at the end. 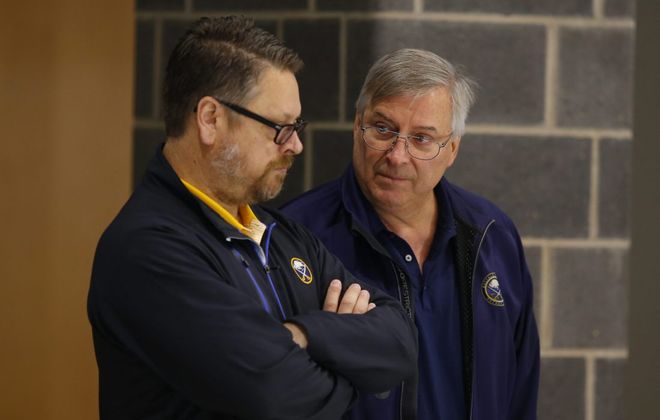 It's a Wednesday morning. Tim Murray, Terry Pegula and the Sabres organization get a phone call that changes the presumptive course of the organization, and I will argue, ultimately overturns an era. Hyperbole ?, yeah absolutely. The degree to which it is hyperbole though, is up for debate and seeing as it's July, I know y'all aren't too busy with other stuff to take a swing at this.

The lure of bigger money wasn't enough to entice then RedWings coach Mike Babcock to come ply his trade in Western New York, preferring, for some reason, to brave the white hot intensity of scrutiny at the hands of Toronto's loudest, complainiest fully grown adult toddlers "Fans" as a full time job.

With the full benefit of hindsight, and the revelations of his conduct as a coach, and general behaviour as a human, I want to be very clear, I am glad he did. Re-plotting an alternate history is a fun exercise, but not one I am going to opine because, and this shouldn't be controversial:

Believe victims. Historically, no one has ever materially gained anything by speaking out against people with power and influence, in the overwhelming number of cases, their suffering is compounded by doing so because power protects itself.

That sorted out, let's look at the thread of history on that decision.

Having recently relieved Coach Ted Nolan (who I will forever claim was done dirty by the Sabres, him standing up for Pat Lafontaine when he was injured is an all time move from a man I will respect forever) the Sabres had a vacancy and after whiffing on the big fish, hired runner up Dan Bylsma.

Having taken a year off to study, reflect and spend time with his family I assume (always get term on your contracts guys) upon being relieved of his duties in Pittsburgh. He boasted a 5 and a bit season tenure, including a cup win and two division titles, that locals argue were paltry return on the primes of Crosby, Malkin, Fleury and Letang, but he carried a reputation as a thinker of the game, Highlights revealing a man that emphasized a controlled approach to the game. One that would surely gel with a team that had spent a year learning a particular brand of work and 'compete' under Nolan.

One could argue the Bylsma era Sabres were, at least on paper, the "best top end roster" the city had seen in a few years. The top 5 scorers for the 15-16 year were Ryan O'reilly, Jack Eichel, Sam Reinhart, Rasmus Ristolainen and Evander Kane (for whom the above disclaimer also very much applies). A unit that, at the time, you could throw out on a power-play and be reasonably confident of competency, if not effectiveness. And they did indeed achieve that, posting a not entirely shameful 12th in the league. The problem rears its head in the form of what is only most generously called a "roster". Depth, goaltending, and infuriating string of injuries and management thereof that saw only 9 players log fewer than 10 games missed. For a full time roster, that's not ideal.

The aging and overpaid Leafs managed a full six standings points WORSE than the objectively terrible Sabres in Babcock's first season as Leafs coach. Good for dead last in the Division, Conference, and League, netting them a winning lottery ticket to select Auston Matthews first overall at the (then) First Niagra Center IN BUFFALO no less.
Buffalo would draft 8th overall, blessedly not falling afoul of any queue jumpers, but fated to select Alex Nylander.
At the time, an arguably respectable selection in that position, but one that history has not looked on favorably. A 2021 NHL.com redraft has Nylander falling to 25th overall (Pierre-Luc Dubois landing at 8, and in some fascinating irony, Tage Thompson falls to 27 a single placing fall from his original 26th overall, which one must assume gets a revisit now). Even as soon as 2018, an article from TheHockeyWriters, asked if Alex was, a scant 24 months after selection, "a bust". A question made all the more grim for the quote in the opener :

Although offensive help is on the way in the forms of Casey Mittelstadt, Cliff Pu, and Rasmus Asplund, the Sabres desperately need Nylander to live up to his immense potential. 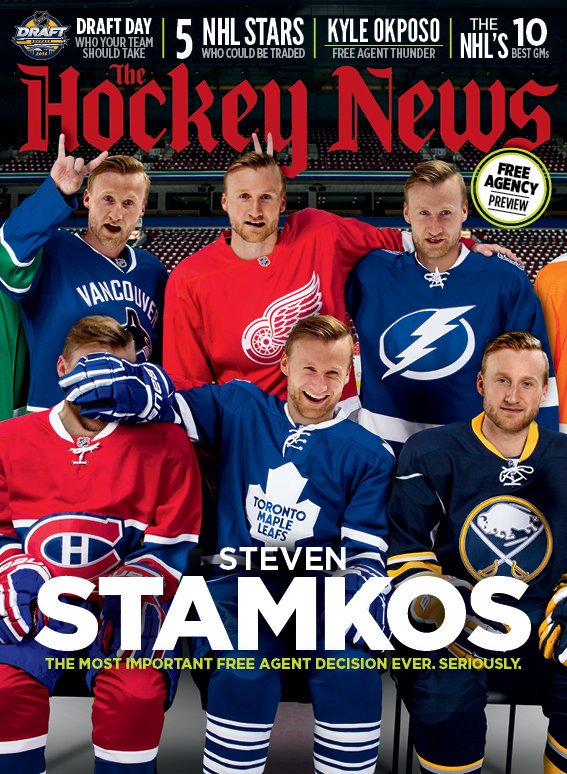 Squared away in the bottom right, almost hidden, was juuuuust enough hope to buoy a fan base that had seen Tim Murray slam the big red accelerate button since his hiring, adjusting focus away from developing assets to bringing them in. It stood to reason that after taking a swing, and really coming close to the fence, only to be caught on the wall by Brendan Shannahan in the outfield (not a baseball guy, forgive the janky metaphor) that Murray would bring the whole of Terry's pocketbook to bear on landing this years big fish.Naturally, a player of #91's calibre had the whole of the hockey world tinkering with their abacuses (abacii?) trying to shoehorn the biggest contract they could envision in to their respective rosters. It was a fun time, and LITERS of ink was spilled, as it always is, speculating where and who and by just how much he was going to end up overpaid. But as we know, it came to naught, the Lightning found a rabbit in that hat, and locked down their captain long term on what passes for team friendly terms in a state with *ahem* favorable income tax conditions. Sabres fans wailed and rent their garments as yet again, Free Agency failed to deliver on dreams, the pain of the still entirely too recent Drury/Briere exit debacle (and a tiny hint of unfulfilled schadenfreude toward TBL fans too if we're honest) drowning out the much more recent, much more pertinent, Ville Leino lessons.
Pivoting quickly, Tim Murray had thankfully done enough due diligence to have a backup plan. According to his recent appearance and rather good interview on Spitting Chiclets (again, again, see above disclaimer re-abuse), the Sabres moved quickly to lock down #10 on NHL.com's Free Agent round up.
Kyle Okposo entered the fold as, what many at the time, and for a significant time thereafter would see as the runner up prize.
Now, Kyle's journey as a Sabre has been in interesting one. I have no intention of digging in to the nuances of it here (portions in the above mentioned podcast appearance), sufficed to say I will be first in line when he publishes his memoir, as it will no doubt be an absolute ripper (Australian slang for very good).

The following year, the League centenary, a season in this specific context some of us probably remember snippets off with a mix of revulsion and agony, which saw Matthews become what we had all hoped Jack Eichel would in Buffalo;
A 4goal debut at home en route to a 40goal, 29 assist (Nice) Calder trophy and a playoff berth for the first time in 3 years. Matthews had a supporting cast of Marner, JVR, Kadri, Nylander (the good one), Bozak, Gardiner, Reilly sitting atop an uninspiring but solid group of supplemental contributors, all coordinated and pulling in the same direction. the first round exit placed them to pick at 17, selecting Timothy Liljegren, a current Leaf, contributing meaningful play to the team today.
It was sickening.

Their rebuild looked like it had been pulled off in less than 24 months, while he same issues from the previous campaign persisted. Tim Murray had assembled his all star top line and seemingly filled the numbers elsewhere as an afterthought, with results very much showing as much.The Sabres would post 78 points, drop 2 places in the entry draft after Dallas and Philadelphia win lottery spots, and Select Casey Mittlestadt 8th overall after a memorable WJC performance.

as a small aside, 16-17 also lead to the funniest stat chart I've stumbled across in any of my admittedly self-indulgent, fanciful Fanpost adventures :

Tim Murray and Dan Bylsma are relieved of their duties. The search for their replacements begins, but that chapter will be visited another time, (or indeed by yourself if the mood takes you).

Glossing over the myriad other factors, moves, personnel and general goings on. This two year bracket, these two decisions going against the Sabres, set the stage to a greater or lesser extent, for what we're looking at today.

Judging how things might have panned out had either or both gone differently is a fun exercise that I now hand over to you to play with in the comments, or posts of your own.

To my mind, the Hermes Conrad conundrum applies:

Three broad possibilities exist, themselves embodied by a single fractal like question, containing their own myriad angles, facets and implications to ponder nested within:

If Babcock comes to Buffalo, Do the team continue tank "good" enough to land Matthews and run a center duo of 15(9)& 34 for a dynasty?
Does Ryan O'Reilly still lose his love for the game and get run out of town on a rail?

If Stamkos comes to Buffalo, Do 15(9) & 91 backbone a roster strong enough to reel in the city's first Stanley cup?
Is Jack still named captain, and the Leadership group centered around a more experienced voice?

If both come to Buffalo, Do they combine enough to be effective and win?
Or does the already unpleasant culture continue to stagnate, and detonate even faster.

So many questions, Some a good deal of fun to pick apart, just as many less so.
Sincerely, Thanks for Reading.