Mike Grier is on the phone.

Not that anyone would be under any illusions, but lets call it what it is: a massive salary shedding exercise for San Jose. They're ameliorating the roster loss with a much younger cheaper defender in Bryson, and spending a couple late round picks to make it happen.

Why would Buffalo do this?

Bryson is a fine enough depth option, but that's all. On another team he might have a more favorable outlook, but with Dahlin and Power and Samuelsson ahead of him, Fitzgerald posting competent showings in limited usage and Johnson and Laaksonen seemingly nipping at his heels on the depth chart, his maximum utility at this point is as an asset outward bound unfortunately, and Picking up a pair of depth picks in the equation is nice enough.
Erik Karlsson still has name brand recognition. The Sabres had been loudly rumored to be in the market for a veteran RD to bolster the group, and mentor the frankly terrifying crop of young defenders in the stable. Being a fellow countryman, and essentially the prototype for the back on track Dahlin adds some nice pathos to the story. In addition to that story angle, #68 quietly had a stellar 21-22 season for the Sharks, in performance, if not value. 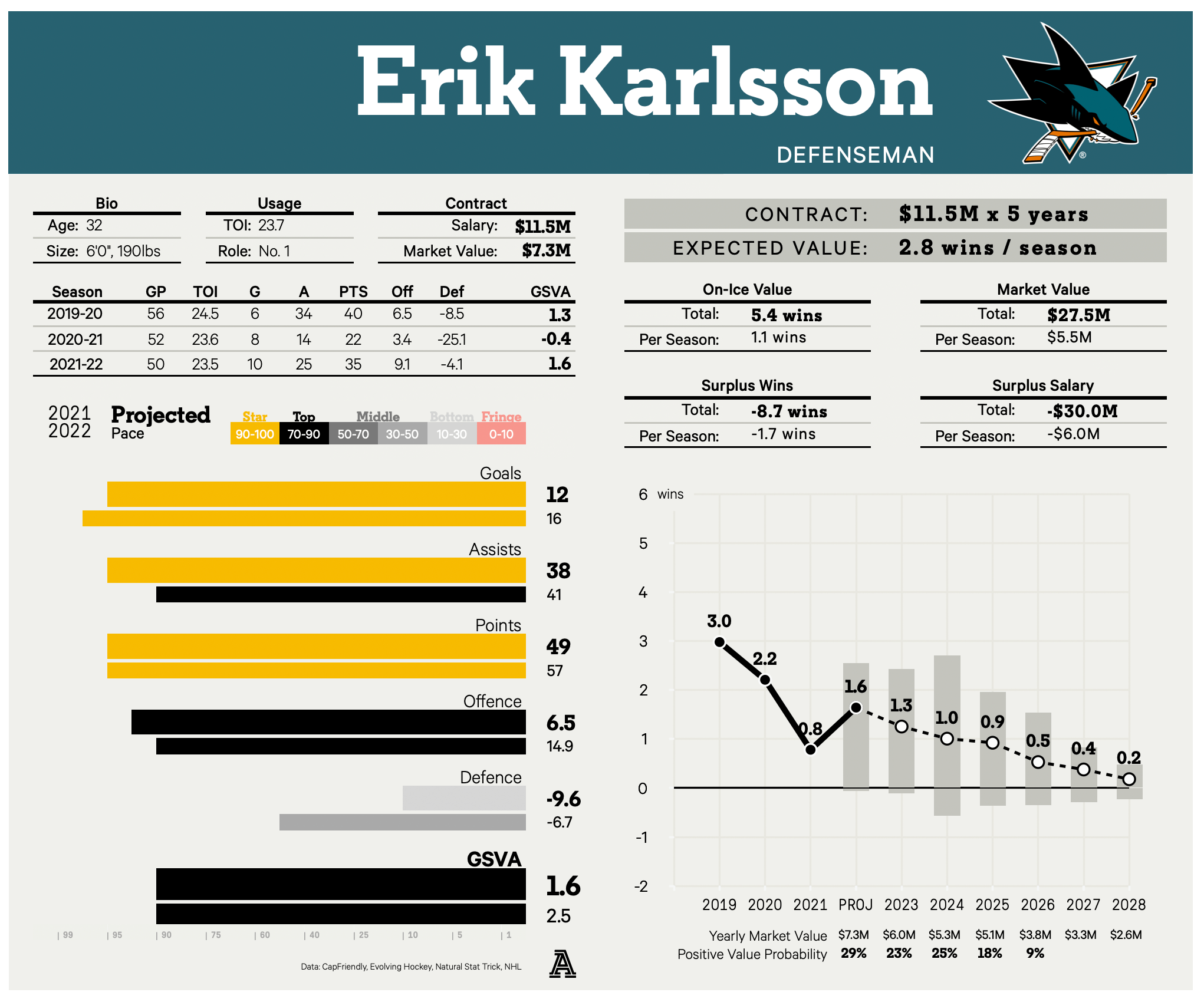 Is he an 11.5MILLION dollar hockey player, absolutely not.
Is he a 7.5Million dollar hockey player. still no, but it's a LOT closer.
As mentioned in the Athletic article I pilfered the above image from, health is an issue for Erik, and is generally believed to be the primary culprit for the cataclysmic pot hole that was his '20-21 season output.
Will that change in Buffalo, with the history of Defensemen and injuries and injured Defensemen here. Only the Hockey Gods and their fickle whims can tell. That aside, I do think there's reason enough to believe that in a different system, in a slightly reduced role, his offense numbers and output could be improved while sheltering his defensive effects. Pairing him with Samuelsson seems like a solid option if that's the route you want to take, giving you a total D group that looks like so :

Alternatively, you could go for a Blitz arrangement :

My point is, you would have some options that create flexibility on how you defend, as well as how much, and to what extent, you attack from the back end.

Beyond the on-ice impacts, taking on a 7.5 mil cap hit for 5 more years is not something to be done lightly. ALL the core are up for extensions in that time. Some will get bridges(JJP just feels like a bridge guy for some reason), some will need long term deals (Cozens-8 year deal immediately please). That Karlsson's deal will now expire the same summer as Skinner is neat, in the orderly sense, but grim to realize you've got 16MILLION tied up in 2 players who would still ideally be giving you yellow bars on those fancy Athletic dot com charts, but are on the wrong side of 30, with historical comparisons that most certainly do not smile upon your outlook.

Now, Erik has a straight up NMC. He has full veto power. Why would he waive that to give up the sun shine of California for the capital W Winter of Western New York.
My pitch would be this: New GM Mike Grier is walking around wiring up demo charges, in full view here guys. It's all coming down, one way or another. You can stick around and play with league minimum free agents and toddlers for the rest of your deal if you want. OR, you can go play with and mentor 2 first overall pick defenders, one of which you're likely to be playing with on National teams and Olympic squads, and a forward group stacked with on the precipice contributors coached by a guy called 'Donny Meatballs'. You're making 11.5 million, and here you have the opportunity to be a contributor on a team about to be making a playoff push again, instead of tearing it all down. PLUS you get reunited with dear old friend Craig Anderson. Worth it for dealing with the weather I'd argue.


Anyway, therein lies the gamble.
You're getting a defender with observable scoring effects, name brand recognition, a supplemental, and instructive skill-set for your current group, well and truly clear the cap floor for the rest of forever basically, and you give your team, and fan base, the message: it's time to push.

As ever, Thanks for reading, you've more than earned the right to drop your thoughts, opinions, denial, bargaining, acceptance and inarticulate name-calling below. Cheers.