Upon reflection, what the Sabres need more than anything is a fresh start. They need to do something that clears the wreckage of the past, and allows them to move forward with hope and optimism. This doesn't necessarily mean cleaning house, as I hope to show. However, it does mean doing something that seems significant, or that ends up being significant in short order.

Coming into the re-sign period, the Sabres have about 46 million 35 million in cap space according to Spotrac. I would resign the following players:

Sabres buy one year of UFA status, pay a bit more than perhaps Oloffson is worth. Let's not get carried away with Oloffson, he's a 25 year old guy who has never scored more than 25 goals in the NHL--this contract is a hefty one to hand out, but its a sound bet on Oloffson's potential.

Kahun bets on himself with a bridge deal that probably undersells him a bit, but gets him to UFA status after 2 years to prove his worth. With 2 good seasons he could cash in when the cap starts to go up again (hopefully).

Both the team and Ullmark's interests appear to be to have a 1 year prove it deal. He was injured last year as he was coming on. Given the strong crop of UFA goalies, he is unlikely to beat this offer in free agency, particularly becuase he is an RFA. He gets himself to UFA status in his age 27 season next year.

With due respect to resident expert Chad Dominicis, I disagree that the Sabres will not select someone at #8 that can help them immediately. I am involved in a ridiculously competitive sim league so I have obsessively scouted the NHL draft. I believe that there is a slight chance of Marco Rossi falling to them at #8. According to eliteprospects.com's consolidated rankings, he is the #8 overall prospect. This represents an average of all of the major scouting services' rankings. When you factor in his size, there's a chance that he is available at #8.

This is a player that, to my eyes, is ready to compete in the NHL right away. He's already put up more than 2 points per game in the juniors and there is no sense in sending him back there. He is small, but strong and has excellent balance. His skills play at any level and his habits on the defensive end are already strong. He could start off as a 3rd line winger from day 1 and could also step in on the power play.

The production that Rossi put up in the juniors was not just good, or even excellent. It was historic. On a point per game basis, he had the 7th best season of all-time for draft eligible players in the OHL. His 2.14 ppg were better than players like Jason Spezza, Joe Thorton, Mitch Marner, Mike Ricci, Taylor Hall, Owen Nolan, and Marc Savard. 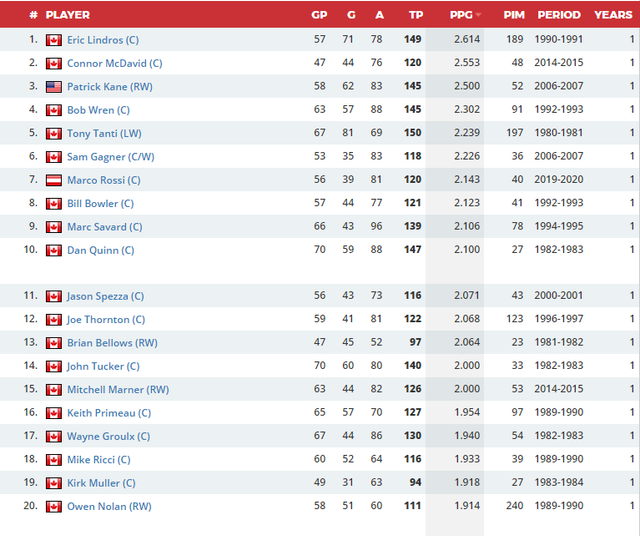 (Side Note: There are not too many busts on the all-time ppg list for the OHL either--Only Bob Wren qualifies--but for some reason he was selected in the 4th round despite his amazing draft eligible season).

The knocks on Rossi are, in my view, the kind of arguments we will look back on in a few years and characterize as typical hockey guy thinking. He's only 5'9"--but if you watch him play he has a low center of gravity and constantly wins pucks in close situations. He's not blazing fast, which some people throw on top of his size. But we've seen guys improve their skating--we have not seen guys improve their hands or hockey sense--which Rossi has in spades. Personally, I think his skating is just fine and would be above average in the NHL without any improvements.

Therefore, I'm going to be optimistic and say that we are able to land Marco Rossi and that he is a middle six LW on day 1. Long term he factors into the #2 or #3 center role with Cozens, Mitts, and Ruostolainen. If he can't stick at center he is a top 6 winger all day.

If Rossi is unavailable--some other options I like at #8 are Cole Perfetti (do it all top 6 forward without any skill that pops, but with a comlpete all around game); Alexander Holtz (best scorer in the draft who may not drive play himself but who could easily score 40 on Eichel's wing); Lucas Raymond (at times he looks like Dahlin at forward for me--hyper agile, great stick handling, very smooth; Jamie Drysdale (he is a top 5 talent--in the unlikely event he falls you have to take him regardless of position). .

Players I do not want at #8 include Lundell (I love him outside of the top 10 but he has the risk of becoming a bottom 6 guy due to a lack of offensive upside--at his best he could be a 2nd line, play driving, two way center, but this organization needs some offensive punch); Sanderson (do not even think he is the 2nd best d-man for me); Askarov (do not take a goalie in the top 10).

Why Vegas makes this trade:

Tuch has had a bumpy ride in Vegas this year and could use a change of scenery. If Vegas does not win the Stanley cup this year, it will most likely be blamed on a lack of playoff d-men. Forwards like Krebbs and Glass are in Vegas' pipeline, but there are no promising internal options on the blueline for the Golden Knights. The seal is adding Apslund, who they can throw in the mix of forwards competing for a bottom 6 role vacated by Tuch.

Another reason the Golden Knights make this move is Tuch's contract. Vegas isn't in the worst cap crunch, but cap space is thin, and having a 3rd line winger making 4.75 million per year is excessive, particularly in light of the fact that they have an organizational need on the blueline.

Vegas convinces itself that Ristolainen's flaws can be mitigated by sheltering him a bit as a 2nd pair d-man. They can also use his versatility on the power play and penalty kill as well.

Why Buffalo makes this trade:

The centerpiece is obviously Tuch. He had a rough season, playing only 42 games and scoring only 8 goals and 9 assists. He also saw his minutes decreased from almost 17 minutes per game to under 15 minutes per game. However, we know he is capable of more. In 2018-2019 he scored 20 goals and 32 assists in 74 games.

As the heat maps from hockeyviz show, he has been equally inconsistent from year to year in his shot impacts:

However, you see that there could be a possession driving beast in there if Tuch can put it all together.

You can't deny Tuch's talent or ability to take over a game. He has a unique ability to carry through the neutral zone and dangle through several defenders to gain zone entry. He would be, at the very least, an upgrade over Marcus Johansson in terms of a transition winger on a 2nd line. He could also add skill and zone entry ability to a 2nd powerplay unit that, for the past few years, has been non-existent or embarrassingly unskilled.

Apslund, for me, is a prospect who is unlikely to make a mark beyond a 4th line player in the NHL. He's sort of the incentive to get Vegas to make the trade. The 4th coming back helps us because the Sabres need all the picks they can get in the next few years to add depth to their prospect pool.

That's it as far as trades go. I think less is more. I'd rather Adams make 1 trade, but get it head on, than make a bunch of moves hoping that something sticks to the wall.

Despite that situation, I want the Sabres to be very cautious in free agency. The team does still need a 2C--but really you have organizational depth down the middle. What's needed then is a veteran stop gap.

The team also is in need of a left handed d-man to fill in for the departed Pilut and Scandella.

Brassard will be entering his age 34 season in 2020-2021. However, he still appears to be more than capable of holding down a middle six role:

As you can see he stabilized what appeared to be cratering possession numbers by returning close to league average in both offense and defense. What he really brings to the table however is faceoff ability (55 percent this year), decent skills, and a hard shot. As a stop gap for your 2nd line center, you could do a lot worse.

He's coming off a 1 year 1.2 million dollar prove it deal with the Islanders. The Sabres overpay with an extra year and a little more in terms of dollars to bring him to Buffalo. If he does not work out, he could be bought out relatively cheaply.

Heed, is an attractive bottom pair option on the left side. He is not going to put up any amount of offense, but he play well in his own zone. 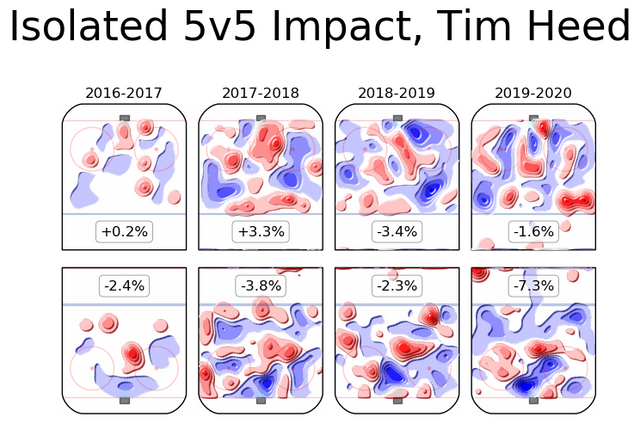 In terms of straight corsi effects, his CF% was a solid 55.2 and he was 6.8 percent better than his teammates in this respect. He's already signed with a European team to stay in shape pending the NHL season and its unlikely that the Sharks--who already have an expensive blueline and who have some NHL ready d prospects (Merkley, Pasichnuk) would want to spend anything on a bottom pair d-man.

Howard really struggled this year and may in fact be washed. However, he may have just given up behind a truly terrible Detroit team. Here, the Sabres sign him to a prove it deal and have a 3 way competition in training camp between Hutton, Howard, and Ulmark for the starting job. The loser gets burried in rochester as a mentor to UPL.

This is a lineup that should be competitive for a playoff spot in my opinion. You have an elite 1st line, with a strong and young middle six that should generate scoring opportunities and has plenty of talent. There are guys like Thompson and Mitts waiting in the wings in Rochester should anyone falter--or if Rossi or Cozens show themselves to be not ready in the first 9 games of the season.

You also would be one of only a few teams with cap space to add a significant piece at the deadline (most likely a goalie and/or a top 4 dman). If things go the other way, your cap space would allow for greater flexibility in selling off guys like Larsson, Johansson, etc.).

Even if Rossi is unavailable at #8, you would still have a forward lineup of something like this:

This would still be a marked improvement over what we had last year.

And we would have someone like Perfetti or Holtz ready to step into our top 9 the next year or the year after.

Now getting back to my initial premise of a jump start--I am definitely feeling renewed with this lineup. And we really didn't make too many drastic moves other than the Risto deal--which at this point is not even drastic. Given that its unlikely that the Sabres are going to spend big or be super active (given they have no support staff) this is the type of off season I hope they can pull off to set themselves up moving forward.

NOTE: Cap figures have been corrected; I initially misread Spotrac to mean that the Sabres had 46 million in cap space. In fact these were total cap allocations. Given an 81.5 million flat cap---I have adjusted the numbers accordingly.