Once upon a time the Buffalo Sabres consistently had this thing called "secondary scoring". A legendary beast that has long been absent from this team, but rumors are that between roster shake ups and coaching upgrades this glorious creature may return this coming season.

The Sabres had flashes of this with various players last year (Marcus Foligno being the main culprit) but no one was ever able to put it together consistently for long enough stretches to get close to the 20-goal mark.

But we live in a league where Paul Byron (remember him?) can score 22 goals for Montreal, and as such we must believe that goal scoring can truly come from anywhere.

In my memory, the most vivid example of this kind of production is of Mr. Daniel Joseph Paille who scored 19 goals for a very "meh" 2007-2008 Sabres team (the post "Darcy and the Terrible, Horrible, No Good, Very Bad Free Agency Day" Season), and then never scored more than 12 in a season the rest of his career. 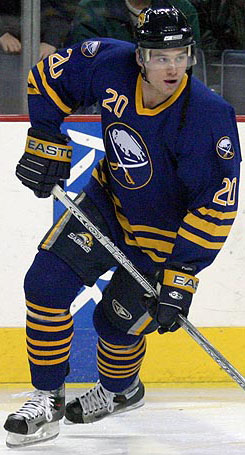 The "Dan Paille" can be any kind of player, a rookie just starting out, or a veteran having a resurgence of a season. The only qualifications are that they can't have done it before, and it might not be all that sustainable (pressures on, Byron!).

There are a few players that will have the goal scoring opportunity this season that they did not have in previous seasons for one reason or the other. The thing to deduce is the difference between those who are producing because they are developing into effective NHLers (like a Nylander/Baptiste/Bailey) against somebody whose production is of the "flash-in-the-pan" variety. So who are the guys that are going to give the Sabres an unexpected offensive lift?

After being selected in the First Round by the NJ Devils Josefson has put up 60 points in 276 games. Not exactly a world burner. His career high in goals is 6, which came in 62 games which was also a career high. He's likely the fourth line center next season and is unlikely to see the ice enough to luck into 20 goals. I would rename this award for him if he scored more than 20 goals.

A Fifth-Round Pick of the Boston Bruins, which means that every goal he scores would elicit many Bruin tears. Sweet and delicious Bruin tears. Needless to say I'm rooting for him. That doesn't make his success any more likely. Since his selection in 2012 he has appeared in only 58 games, though he has scored 6 goals and 10 assists in that time. With his AHL success it would not be out of the question that he sneaks onto the roster, and if he can find his way onto the second power play unit he could make his way into double-digit goal production. But lots of big-ifs involved here.

Most of us are familiar with the former Minnesota draft pick. After the trade to Buffalo he has yet to fully develop, but with new management and coaching comes new opportunities. Thus far in his career he has only scored 48 points in 178 games, with career highs of 10/7/17 in 74 games 2 years ago. While a small bump in production is already expected given his new contract and a possible top-9 role, to hit 20 goals would be outstanding though unlikely for the young forward. Expect to see his assist totals rise, thanks mostly to better line mates, but I don't think the goal scoring will be there for him.

I'm going to leave it to you guys to decide whether Gus would qualify for this award. Nobody personified the issues inherent with Bylsma's system more than Girgensons. He was extremely effective under Nolan, and his strengths shouldn't have disappeared unless he was truly being misused. That being said, in his four NHL seasons, he has only hit double-digit goals once. But I think given the current makeup of the roster it would not be unreasonable to expect him to maintain a top-9 role with heavy rotation into the top-6. With better utilization I believe he could hit double-digit goals, and near 40 points, if he takes advantage of the opportunity in front of him.

The Rookie out of UMass-Lowell is not likely to start the year with the Sabres. But with the lack of winger depth at the NHL level, anything could happen coming out of training camp. If he can secure a spot out of camp and become a part of the forward rotation, there's a chance he could carve a role. He's a true unknown, but was the leading scorer with UMass-Lowell so if some of his scoring ability can translate to the next level he could surprise.

Plus my computer auto-corrected his name to Nic Despair. Need I say more?

Who is your candidate to hit Dan Paille levels of production, anyone I didn't mention? Let me know below!