With a lot of chatter surrounding the possibility of a Steven Stamkos signing by the Buffalo Sabres, the #1 concern seems to be: How can we afford him?

I'm glad you asked. A lot of attention is being paid to the '18-'19 season as that is when both Jack Eichel and Sam Reinhart are coming off of their ELC's. So, I am going to focus on that year.

It seems to me, that many people look at contracts signed today and try to equate them with today's salary cap. However, we need to look at what tomorrow's salary cap will be. We saw a lot of moaning when Ryan O'Reilly signed his big contract last summer but the cap is already projected to jump from $71.4M to $74M in time for the 2016-2017 season. That jump pays more than 1/3 of O'Reilly's cap hit. 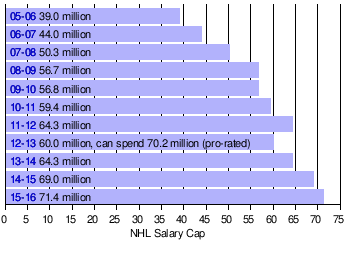 Now, let's address Eichel and Reinhart. I'm going to look at Jonathan Toews and Patrick Kane as examples. They each signed 5 year contracts for a $6.3M AAV for the 2010-2011 season. That's 10.6% of the cap going to each player. Let's assume we can do the same with Eichel and Reinhart, giving them each $8.5M/year deals.

Rasmus Ristolainen is a little harder to gauge than those two. I'm just going to look at some similar players: John Klingberg: $4.25M, and Dougie Hamilton $5.75M.

I'll go one better and give Risto $6M, for the sake of argument.

Zemgus Girgensons is also tough to gauge but I see $3M being thrown around often. So, let's say he signs somewhere around there. I'll even bump him up to $3.5M, again for the sake of this argument.

Matt Moulson was bought out following the 2017 campaign. Gone are Tyler Ennis and Evander Kane. Ennis would be 29 and Kane 26. I'm okay moving on without them.

Are they all going to work out? No, but many of them are already showing us glimpses. You only need 10 to fill out your roster. I'm mostly just worried about my top 9. Can we find 2-3 players from our current crop?

I should think so.

Then you have this year's (including our presumed top 10 pick) and next year's draft classes coming up behind them. Presumably to replace players like Larsson and Foligno when they are UFAs.

That's roughly what these players will be making their first 5 years in the league.

Then, maybe you start worrying about the future, right? But Bogo could come off the books after '18-'19. There's $5M to give to Pysyk and McCabe. And don't forget the cap jumping another $3-ish million each year. Plus Moulson and Hodgson dropping from a combined $3.37M to $1.625M.

The Sabres can definitely fit Stamkos under the cap. So, I'm not ready to listen to that as an excuse for not signing him.