The Sabres have plenty of options on what to do with the #21 pick, and one of them is to address a big organizational weakness.

One of the nice things about having such a big pool of picks and prospects, as Buffalo Sabres general manager Tim Murray does this year, is that large war chest gives him plenty of options on draft day when it comes to the late first round and early second round.

The Sabres could use the pick as part of a package to trade for, say, a young goaltender, or for an established top-6 veteran with a big contract that another team can't afford to pay. They could move down in the draft since they pick again at #31, or they could use some of their ammo to move up a few spots if there's a prospect they just can't let slip away.

However, in SBNation's mock draft, we decided to use the pick as it stands to help shore up the biggest weakness in the Sabres prospect pipeline - left wing - by selecting Paul Bittner, left wing from the Portland Winterhawks of the WHL.

Buffalo's system is stacked at center, is still strong on defense, and has a number of intriguing prospects in net, while at right wing the organization is relatively loaded, with Hudson Fasching, Justin Bailey, Nick Baptiste, and possibly JT Compher. But the left wing depth is comparatively pathetic, with William Carrier, Gustav Possler, and maybe Dan Catenacci at the top of the chart. 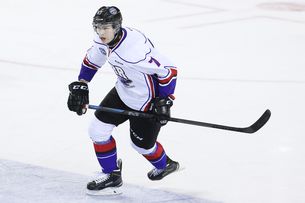 Read more about the specific's of Bittner's game and how he projects into the NHL with our prospect profile.

By selecting Bittner, the Sabres would instantly inject size and scoring ability at the top of their left wing depth chart. Standing at 6'4'', and with a body that will continue to grow, Bittner has elite NHL-level size, and has shown that he can produce when paired with good teammates, as he has been in his time with the Winterhawks.

But is he more a product of playing with top players, or can he produce on his own? That's the real question, but if you're taking the Sabres rebuild to its ultimate conclusion, it shouldn't be too much of a question, because great players will be here. The now-20 and 23 year olds will be seasoned, talented veterans by the time Bittner makes it to the NHL, and his big frame gives the Sabres something they'll be lacking at that point, with nobody currently on the top forward lines at bigger than 6'2'' (yes, Foligno and Grigorenko are both 6'3'', but neither is guarenteed to be here in a few years and both have been relatively disappointing with their big frames).

There were other possibilities with this pick (I'm sure we'll hear about them) but we simply felt Bittner fit the best combination of organizational need and best player available. Give us your thoughts on Bittner and the SBN Draft so far in the comments.

Here's the draft board thus far: