Tim Murray said it was the easiest pick he'll ever make, and it was pretty easy for us as well.

With the #2 overall selection in the 2015 SBNation NHL mock draft, the Buffalo Sabres are proud to select, from Boston University, Jack Eichel!

Or, as Tim Murray will likely mumble..."Sabres take Jack Eichel".

However it happens, it seems a foregone conclusion that the Sabres will be selecting Jack Eichel with their first pick in the upcoming draft, with Edmonton - both in real life and our SBN mock - taking Connor McDavid at #1.

But settling for #2 doesn't mean the Sabres are settling for anything less than a future franchise cornerstone who, according to some analysts, is better than any prospect (McDavid aside) to come out of the draft since Sidney Crosby. 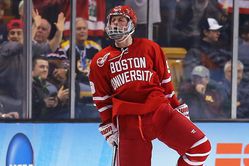 Read more about Eichel's game and what makes him so special in our prospect preview.

The selection of Eichel, who is almost certain to play in the NHL next year, will mark the end of two long streaks in Buffalo. First, it signifies the end of the downward portion of the team's rebuild, and the beginning of the glorious up. And second, it marks the end of a long era of Sabres hockey without a true superstar player. Yes, Ryan Miller's "USA Vezina Tour 2010" was fun and all, but those few months aside you have to look back to the 1990's to find a true superstar wearing blue and gold, or red and black.

What makes Eichel such a sure thing in the eyes of so many? It starts with his physical tools. He has ideal size, a powerful, explosive skating stride, and as we saw last week at the draft combine, he's a beast in the weight room. Combine that with his long reach and gigantic stick and he can protect the puck and play a strong two-way game down the middle. He's got a great shot, is a creative and accurate passer, and knows how to finish with his excellent shot or by finding the right spot on the ice to camp out.

And if all that doesn't convince you, he just put up the best numbers for a college freshman in forever, then went straight to the world championships and impressed against NHL competition, all at age 18.