The Law of Diminishing Returns is a law of economics that states:

"Tendency for a continuing application of effort or skill toward a particular project or goal to decline in effectiveness after a certain level of result has been achieved."

As fatigue both physical and mental begins to take a toll on professional athletes throughout the course of practice, a game, and even an entire season, a dip in performance is not only noticeable but also expected for even the most talented of players. So far this season the Sabres have two players visibly fighting fatigue on a game-to-game basis. It’s difficult to not see how this has been in effect for the Sabres’ top-pairing on defense of Rasmus Ristolainen and Josh Gorges while watching Sabres games or parsing through their underlying numbers.

So far this season Buffalo Head Coach Dan Bylsma has relied heavily on Ristolainen and Gorges to match-up against opposing team’s top players and eliminate them in an effort to optimize his line-up each night. Rasmus has been averaging about 18:39 Time on Ice (TOI) a game at even strength with Josh Gorges coming in at about 18:28 TOI per game; for perspective Drew Doughty of the LA Kings is averaging about 18:37 TOI at even strength this season and Erik Karlsson of the Ottawa Senators is skating about 19:25 a game. The issue thus far hasn’t been necessarily an inability for the pair to stand up to the task asked of them, but that they are asked to carry too much of the load required to keep an opposing team’s best players off the scoreboard. For example this is the pair’s even-strength TOI against opposing teams’ players thirteen games into the season:

Note: These players were specifically chosen as all play within their respective teams’ top-six forwards and top-four defensemen. It helps that the Sabres have played the Flyers twice and Tampa Bay three times to create a slightly larger sample-size than say showing matchups from just the Penguins game.

The issues with these numbers are pretty easy to discern. There’s the small sample size in the TOI numbers and a quarter of the Sabres’ season has been played against the Tampa Bay Lightning; last year’s Eastern Conference Champions are a known possession monster that finished the 2014-2015 season with a CF% of 53%. That’s an elite number that they will surely climb back to this year as they currently sit at a CF% of 50.8%.

So suspending disbelief and assuming these numbers mark a trend rather than an anomaly then there is reason to be concerned that Ristolainen and Gorges are playing opposing team’s best players nearly ten minutes a night at even strength. It’s very difficult to hard match pairings and lines outside of face-offs and even then you can only really do so with last change on home ice, so an alternative to playing Rasmus and Josh so much against top-competition would be to split the time a bit more evenly amongst the top-four defensemen.

So while the Sabres are indeed worse off in terms of possession with #55 and #4 on the ice, it optimizes the rest of the defensemen to face lesser competition and gain an edge over the opposition. Ideally this time would be a little more evenly split and the line-up as a whole would be able to take advantage of lesser competition while off-setting the power of the opponent’s best players.

But is playing top competition so much the only issue or is it overall TOI period? Well, looking at a With or Without You (WOWY) chart for the Sabres it’s pretty easy to see two major problems (Credit to @ineffectivemath on Twitter, Micah Blake McCurdy, for the following charts): 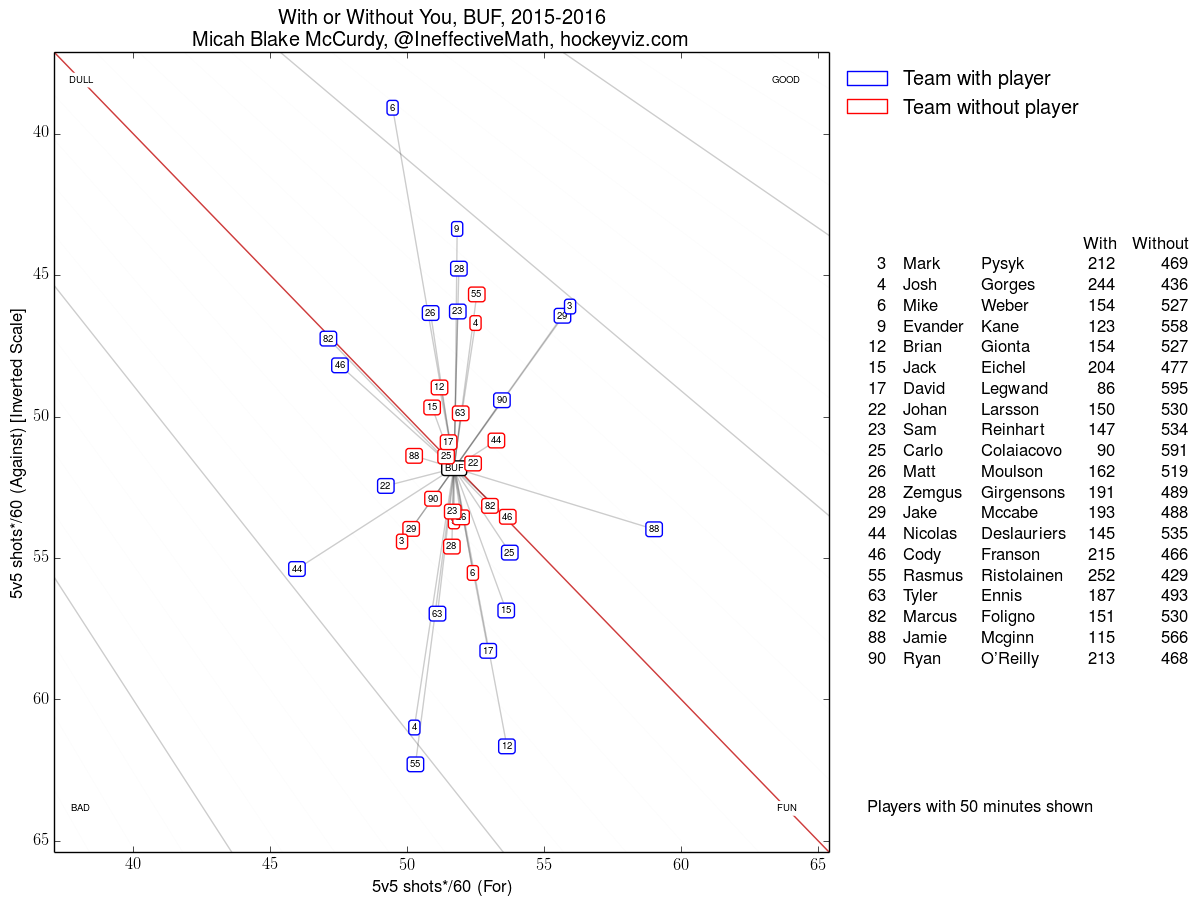 The two aforementioned major problems are shown above getting dangerously close to the "Bad" corner of the graph: Rasmus Ristolainen #55 and Josh Gorges #4. The WOWY for the Sabres’ top-pairing is pretty damning when you see how much better the Sabres are in terms of shot-differential with the pair off the ice. For a more micro look at how much better the team appears to be without Ristolainen and Gorges on the ice here are individual WOWY charts for each player. 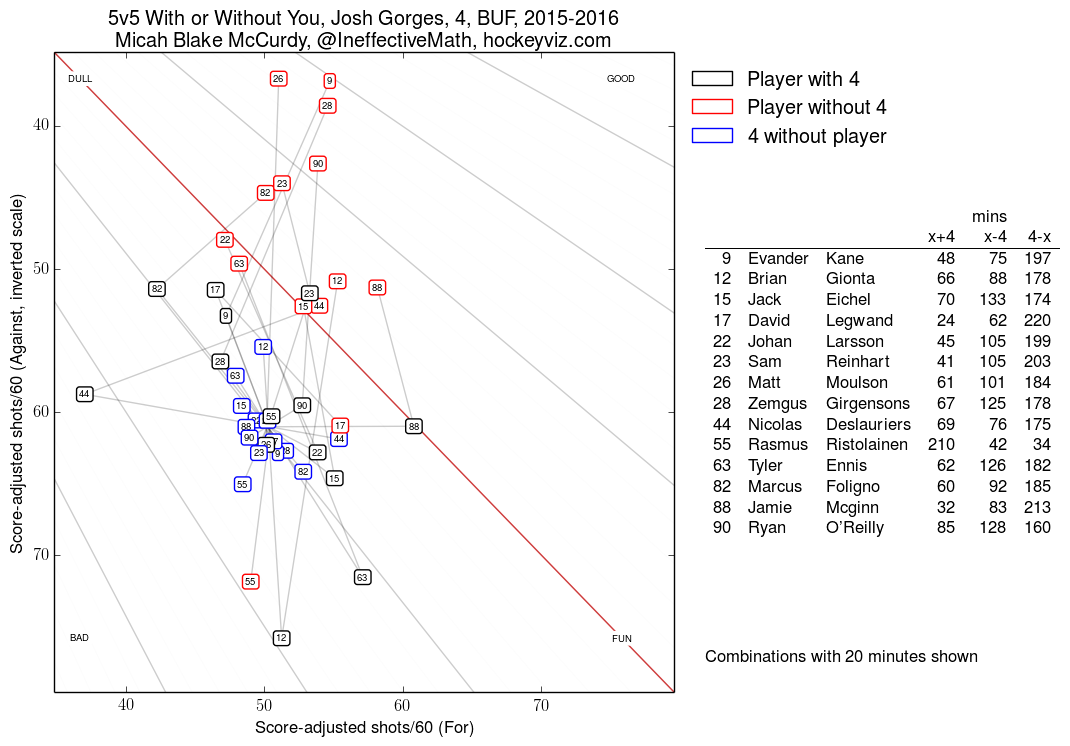 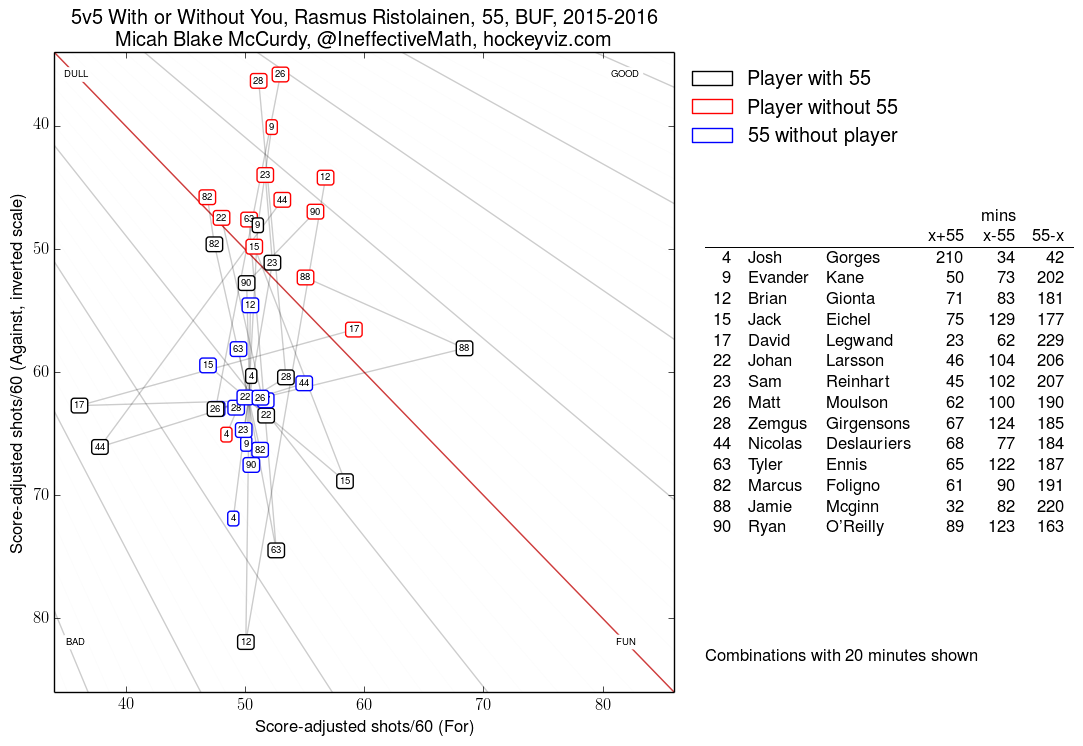 One thing to consider with so many players doing better when not being on the ice with Ristolainen and Gorges is that the top-pair may be getting caved in by playing opposing teams’ best skaters, but by doing so they are effectively eliminating that competition since it frees up the rest of the roster to face the lower lines and pairings of opposing rosters.

There are a couple conclusions that can be drawn from this data. One solution to this situation is to take some of the load off of the pairing of 55 & 4 and put it onto the second pairing whomever that may be. Understanding the talent level of the Sabres’ back end leads to the possibility of cutting Rasmus and Josh’s minutes at even strength down to around 16 minutes and give some more TOI at even strength to players like Mark Pysyk, Jake McCabe, and Zach Bogosian when he’s healthy and returns to the line-up. The main idea there being that giving less TOI to 55 and 4 will lead to better play due to reduced mental and physical fatigue. The other side of that coin is that players like McCabe, Pysyk, and a healthy Bogosian may not be able to handle more minutes than they’re already taking on.

There’s also the possibility that Gorges is dragging Ristolainen down a bit when paired together since there’s plenty of evidence that Gorges isn’t the best possession player out there. But when looking at their WOWY charts it is clear Ristolainen fares much better with Gorges rather than without him, though Gorges’ has little drop-off without Ristolainen. They’ve played a total of 196 minutes of ice time together at even-strength and only a little more than 30 minutes of ice time apart from one another, so there is far from enough evidence to put much value in the idea that Ristolainen is dragging Gorges down or that Gorges is making Ristolainen play better.

While optimizing your roster is an intelligent way to play in today’s NHL it’s much more fortuitous to leave such a task to a forward line or two and split tougher competition up evenly, not necessarily to the second, amongst your top-four defensemen. Doing so allows your best players to be your best players on both sides of the puck just a little bit more.

Thanks to stats.hockeyanalysis.com, hockeyviz.com, war-on-ice.com, and naturalstattrick.com for providing data as well as visuals. The work being done by these folks and the websites they run is invaluable to the sport of hockey, the progression of the NHL, and the understanding of the game by everyday fans such as you or I.