It's time for rounds two through seven, and the Buffalo Sabres still have plenty of picks to make. Keep up with everything draft-related all day, right here.

Day one of the NHL Draft - and Sam Reinhart - are in the books, and it's time for day two, which features the remaining six rounds. The Buffalo Sabres have seven picks to make over those six rounds, with three in round two and none in round four.

Buffalo also holds the ever-intriguing first pick of day two - has Tim Murray's phone been ringing with other teams trying to get that one player still available that they covet, or does Murray himself have his eye on one player in particular?

Either way, a lot more prospects will added to Buffalo's growing pool today, and this is your open thread for the next few hours to talk about them all.

Where: You can see the draft on NHL Network 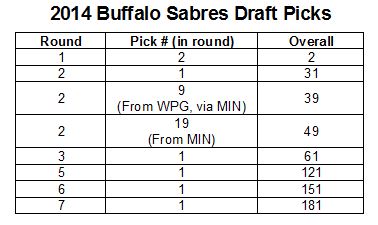