All the tanking this season has come to fruition, as the Sabres have clinched 30th place thanks to their loss (and Edmonton's win) last night.

Once everyone realized just how bad the Buffalo Sabres would be this year, the focus of the team and the fans quickly shifted to one goal - getting the top pick in the 2014 NHL draft. Of course, there's no guarantee that any team will get that pick thanks to the draft lottery, but the Sabres could give themselves the best chance by finishing in 30th place, thus enduring them a 25% chance to win the lottery, the best odds in the league.

After last night's loss to the Detroit Red Wings combined with the Edmonton Oilers win, the Sabres have officially clinched last place in the league with five games still to go. Here are how the bottom ten teams currently stack up: 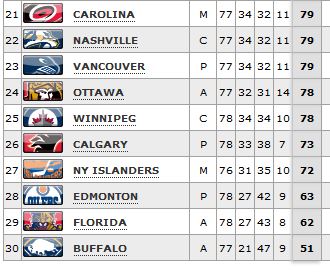 Even if the Sabres win out, the can't finish with more than 61 points, and everyone associated with the blue and gold can now start dreaming of what they'll do with a guaranteed top-2 pick in the upcoming draft.

If you're already looking towards the draft, what the New York Islanders will do with their pick is certainly on the front of your mind. The Islanders currently hold the fourth-worst record in the league, but with nine points separating them from Edmonton, it's unlikely they'll drop any further in the standings, but they could easily swap with Calgary or even Winnipeg should things break right.

Now that the tank is complete, Sabres fans, how are you feeling about Buffalo picking either #1 or #2? Have your opinions changed on who you want them to take? Let's let the last-place celebration begin!