Buffalo Sabres 2014 Trade Deadline Recap: Who's In, Who's Out

The final tally for all the picks, players and prospects Buffalo acquired by shipping out half of their team.

Share All sharing options for: Buffalo Sabres 2014 Trade Deadline Recap: Who's In, Who's Out

The trade deadline has come and gone, and the Buffalo Sabres franchise looks significantly different than it did just five days ago, both in terms of the present and the future. New GM Tim Murray has been a busy man, and after today it's safe to say that he deconstructed the franchise down to rubble in order to build it back up through high draft picks and further moves down the line, thanks to the draft picks he acquired and the contracts he didn't trade.

Yes, as many moves as Murray made, it's important to applaud his for holding on to assets like Drew Stafford, Christian Ehrhoff, Chris Stewart, and Tyler Myers, as today was clearly a buyer's market. Prices were low, and the returns for very good players (Vanek, Moulson, Gaborik) were nowhere near as high as we're used to seeing on deadline day. Those players can still be dealt at the draft or over the summer, and from the way he sliced and diced today, you can be sure Murray will be taking phone calls all summer on those contracts.

Still, the Sabres ended up with quite a haul this week, and we've gathered all the moves into one place to compare exactly what went out, and exactly how much came in.

The Sabres traded away

The Sabres got back

Earlier in the year, the Sabres also traded Thomas Vanek to the Islanders for Matt Moulson, the Islanders 2014/2015 first rounder (they choose) and their 2015 second rounder.  Once it was all said and done and Moulson was dealt, the way that trade eventually shook out was as follows:

If you're wondering where the Sabres stand in terms of draft picks for the next few years, check out this excellent chart from the excellent blog Two In The Box (used with permission). You should also follow him on Twitter @2ITB_Buffalo. 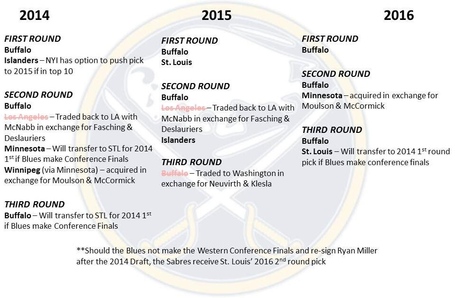 So there you have it, Sabres fans - one of the biggest trade deadline weekend in franchise history is in the books. We know you've got your own thoughts, so fire away in the comments, and stay tuned for more news and analysis.