Amerks Update: Deslauriers, Klesla, and Petrecki add to the fun

The Amerks continue to be lucky that the Calder Cup Playoffs don't start tomorrow, but they're quickly approaching!

Share All sharing options for: Amerks Update: Deslauriers, Klesla, and Petrecki add to the fun

If the AHL playoffs started tomorrow, the Amerks would both be in the playoffs and would be facing rivals Toronto. The same Toronto Marlies that have swept them the last two seasons. Maybe it’s a good thing that the playoffs don’t start tomorrow.

"Showing no mercy ‘til I do it again." (Kings of Leon, Closer)

I had a conversation with a good friend recently about how we feel, for the first time, that the Sabres are utilizing the Amerks truly as a farm team. The Sabres, in case you missed it, are not going to make the playoffs. In all actuality, they were the first NHL club eliminated from playoff contention, and it happened sometime around the beginning of October. (OK, maybe it was a scosh more recent than that). However, by and large, the Sabres have allowed the Amerks to keep trucking. In the face of being a terrible NHL team, the Sabres have not completely annihilated the Amerks. Sure, there continues to be recalls due to injuries, but it could be so, so much worse.

And this benevolence shows - the Amerks are fun to watch. Sure, they’ve been fun in previous seasons, but this year they are FUN. They’re the kind of team you look at and you get your hopes up about. Further, the Amerks stood to benefit greatly from deadline-day moves that GM Tim Murray made. Nicolas Deslauriers, who was initially designated to Rochester, was picked up in the deal that sent Amerk Brayden McNabb to Los Angeles Kings (Manchester Monarchs).

Deslauriers lead the Monarchs in goals. In 60 games with the Monarchs this season, he has 18 goals and 21 assists (18+21=39 points) and 76PIM. He also lead the Monarchs in shots on goal, with 217. He is a reformed defenseman, having been moved to the forward position after starting on the blue-line for Manchester for two seasons.

Then there is the curious case of Rotislav Klesla. Klesla was obtained in the trade that brought Michal Neuvirth to Buffalo. Klesla had been picked up, in turn, by Washington earlier on trade deadline day from the Phoenix Coyotes, who had waived him to their AHL affiliate, the Portland Pirates. Klesla released a statement saying that he was no longer going to be playing hockey in North America, essentially refusing to report to Rochester. He has since been suspended by the Sabres for failure to report. Perhaps, if he had been more patient and his agent had explained how things work (or maybe the agent did, I can’t say – I wasn’t there), Klesla would’ve been aware that assignment to Rochester may not have been for very long. 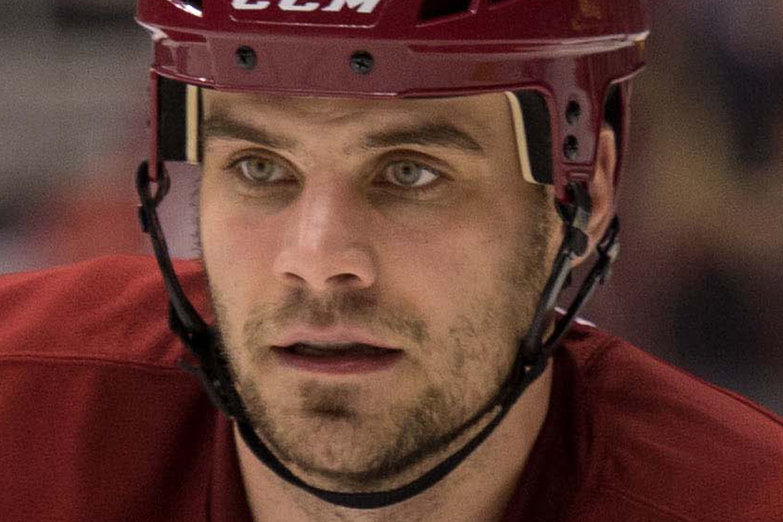 Hear what Klesla had to say about his refusal to report to Rochester.

You see, the AHL used to have this thing called Clear Day. Clear Day was the day that AHL rosters were released with all playoff-eligible players on them, and it was a fairly big deal in AHL-land. Clear Day essentially eliminated the long-ago practice of stocking an AHL team after their NHL club was eliminated from the playoffs, with the hopes of ensuring a long, profitable Calder Cup Playoff run. Clear Day has been eliminated, but a few new and similar rules have been put into place. The new rule, in plain English, states that any AHL player on an NHL roster as of 3pm on trade deadline day is ineligible for the AHL playoffs.

What this leads to, generally, is a lot of players being sent, on paper only, to their respective AHL clubs and then being called, on an emergency basis, to fill roster spots for the NHL teams. Now, again: I don’t have a front-row seat in Tim Murray’s office, and I don’t know what his long-term plan for Klesla was, but it is not too much of a stretch to presume that he was sent to Rochester in order to make him AHL-eligible for the playoffs, and then would be called to play in Buffalo until their season ends. Unfortunately, we will never know (unless I missed something).

More recently, Rochester received Nick Petrecki on loan from the Worcester Sharks (San Jose) to help replace injured defenseman Drew Bagnall. Bagnall had sustained a shoulder injury earlier in the season, which was reaggravated during the contest against the Oklahoma City Barons on Sunday, March 9. It is not uncommon for AHL teams who are clearly not going to make the playoffs to loan players to other clubs in order to increase attention for strong players. Petrecki has been described as having a similar playing style to Bagnall’s, and has played five seasons in the AHL. He is a graduate of Boston College. In 277 AHL games, Petrecki has 46 points (8+46) and 531PIM. This season, he has amassed 3 points (1+2) and 54PIM. He has been described as a strong, physical, stay-at-home defenseman. He was awarded the AHL’s Yanick Dubre Memorial Award as the AHL Man of the Year in 2011-12. Although Petrecki was slated to report to Rochester for Wednesday, March 12’s postponed contest against Binghamton, the recent blizzard prevented his travel. He is expected, however, to play March 14 against the Toronto Marlies.

The Amerks are 7-6 over their last thirteen games, including 2 overtime wins, 2 overtime losses, and a shootout loss. They currently sit in sixth place in the Western Conference with 17 games remaining in the season. According to the most recent AHL-issued playoff primer, the Amerks are on pace for 88 total points this season but, as of this writing, will need 28 more points to clinch a playoff slot. This, of course, changes frequently, and I will bring updates along with my posts. Without further ado …

Me! My absolute favorite player in the history of the Rochester Americans, Scott Nichol, was the guest of Legends Night on March 7. He signed autographs and took pictures and all that jazz. Because I work for The Man, and this involves evenings, nights, and weekends, However, my awesome parents were able to have him call me and leave me a voice mail. I was pretty excited, and I’m probably going to save that message forever. I watched him bring a Cup to Rochester in 1996, and I’ve been his #1 fan ever since. Fun fact: His was the first sweater I ever owned.

The Amerks have a three-in-three this weekend due to Wednesday’s match being rescheduled for Sunday evening. They will face off against division rivals Toronto Marlies on Friday, and then will have a home and home again Binghamton on Saturday and Sunday. They will then hit the road for a series of away games against Lake Erie and Toronto. The Amerks have nine little home games left, and I’m hoping to catch more than a few of them. Stop me if you see me (I’m always open to a free beer, hint hint). Let’s go Amerks!