What to expect during the Oympic break

The 2014 Olympic games began yesterday, and the Sabres season is now on a two week hiatus. Here's what to expect from the league, the Games, and this fine website.

Share All sharing options for: What to expect during the Oympic break

How long does the NHL Olympic break last?

The NHL is on hiatus from Feb 9-25, and the Buffalo Sabres have the honor of kicking the rest of the season off thanks to their rescheduled game against the Carolina Hurricanes. However, teams can call their players back to practice as early Feb 19 at 2pm, giving most of the league about 10 days off.

The actual Olympic games are taking place from Feb 7-23 in Sochi, Russia, which is nine hours ahead of EST for those of you interested in watching live. Get ready to set your alarms for 3am if you want to catch the early games live - late games will start at 7:30am EST.

Can NHL teams still make trades or other roster moves?

Sorry, jack. A league-wide trade freeze went into effect today at 3pm, and won't lift again until 11:59pm on Feb 23, which will be the day of both the hockey gold medal game and the closing ceremonies. As far as roster move, this article from James Mirtle of the Globe & Mail sums up all the possibilities nicely. In short, you can do a few things, but can't do most things. 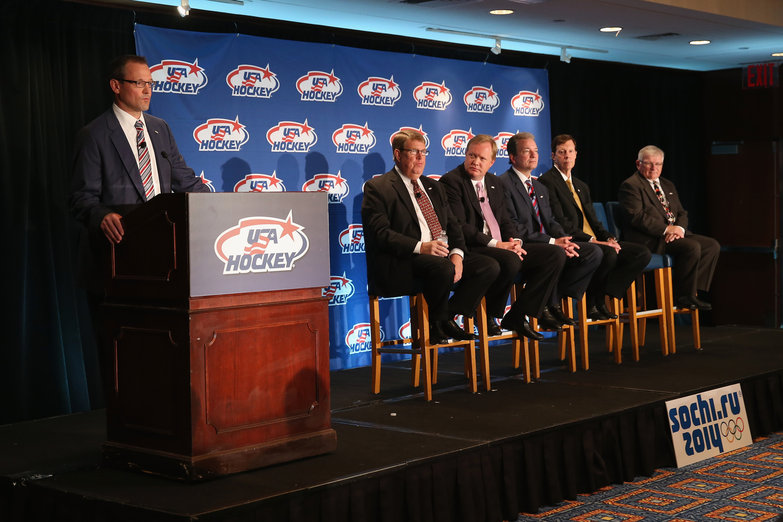 Get to know the players and the schedule for Team USA'a Olympic men's hockey team, including Buffalo's own Ryan Miller.

So when does the hockey portion of the Olympics start?

The Men's Olympic Hockey Tournament, aka the best reason to watch the Winter Olympics, begins on Wednesday, Feb 12, and will run every day except for two through the end of the Olympics, the 23rd. The USA starts their tournament on the 13th, and will play Slovakia, Slovenia, and host Russia in the round robin part of the tournament.

The women's hockey tournament starts tomorrow morning at 3am EST, as Team USA takes on Finland. You can find the full schedule for the women's tournament, where Teams USA and Canada are the heavy favorites, right here.

What will DBTB be doing for the Olympics?

Glad you asked! We certainly won't be shutting down for two weeks - not only will we still be reporting the relevant Sabres news and trade rumors on the daily, but we'll be covering the Olympics as well.

Every morning we'll put up a post with that day's Olympic hockey games, and will feature any Sabres players in those games. This thread will double as our Game Thread for any and all Olympic contests that day, so feel free to chat about Ryan Miller, Team Latvia, or the Jamaican bobsled team if you like. We'll also post recaps of the day's events with again, a focus on the Sabres players, and will cover any breaking Olympic news regarding certain starting goaltenders.

What will the non-Olympic Sabres be doing during their break?

I dunno, going to the beach? In all seriousness, getting away from this no-good-very-bad season for a few daysshould be good for everyone, and we'll likely see a re-energized team once the league reconvenes at the end of February. This will also be a chance for guys like Tyler Myers, Drew Stafford, and the like to fully heal from their minor injuries. We also foud out today that Chad Ruhwedel and Phil Varone to Rochester, and have placed Linus Omark on waivers. Should he clear, he'll join Mark Pysyk, Brayden McNabb, Kevin Porter, and Johan Larsson as potential future Sabres playing in the AHL through the Olympic break.

As for new GM Tim Murray, the next few weeks will be critical times, indeed. Just because there's a trade freeze, doesn't mean that the GMs can't talk with each other. I'm sure there will be plenty of he-said she-said rumors that will leak out during the break, and there could be a flurry of activity as soon as the games end. He'll also be able to focus on the Amerks, and can finish up any start-of-the-job loose ends.

Let us know if you have any other questions about the break, the games, or anything we forgot, and Happy Olympics!