Merely an hour after learning that the heart and soul of their team had been traded, the Buffalo Sabres managed to overcome their emotions and earn their first three game winning streak of the season.

There was a circus atmosphere before and during tonight's game. The type of game that should be (and was, for many fans) impossible to concentrate on thanks to the news that broke out about a half hour before puck drop -  Ryan Miller and Steve Ott had been traded to the St. Louis Blues.

"It was a little bit of a circus before the game," said Tyler Myers. "Just about everyone found out around six o'clock when we got warming up. It was a tough way to go in to a game, but it was nice to get a win on their last game."

Buffalo responded better than they had any right to, opening the scoring with a power play goal from Cody Hodgson, his 15th of the year. The Sharks would come back to tie the game in the second, but Brian Flynn and Matt Moulson put the Sabres back on top 3-1 in the third. Things got a bit dicey when Patrick Marleau tipped in a Joe Thornton pass with 1:15 left, but Tyler Myers empty net goal sent the Sabres home, and Miller and Ott off to St. Louis, with a 4-2 victory.

"It was a little emotional in here before the game," said Moulson, "but we had a job to do out there and we got it done." 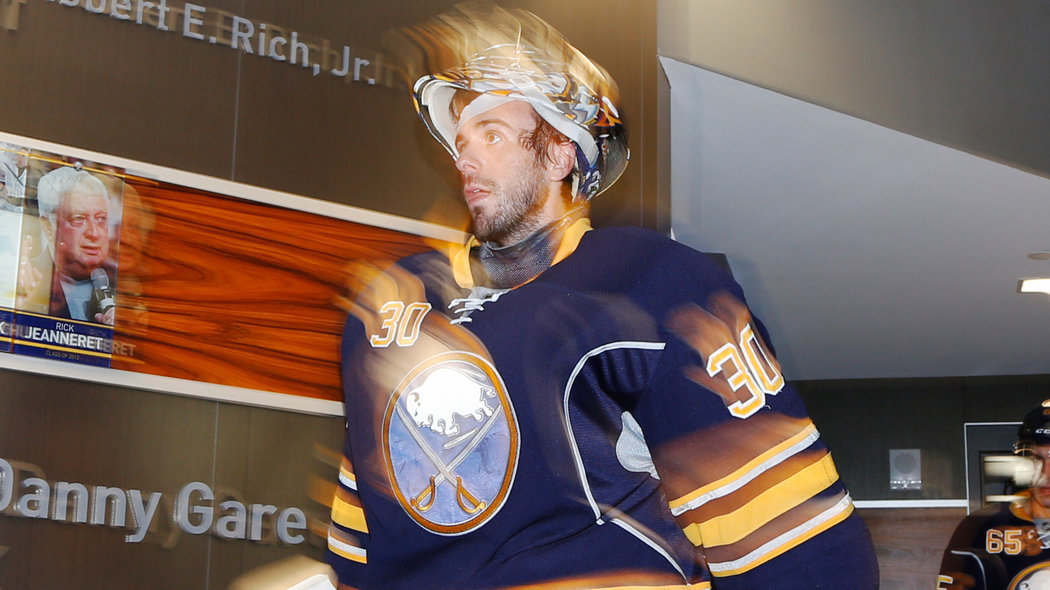 The first major deal of the Tim Murray era was a doozy, sending two of the Sabres biggest trade chips to St. Louis.

A big part of getting that job done was the play of the man who likely now takes over the Buffalo starting gig - Jhonas Enroth. For his part, the inconsistent backup gave us his best Miller impression, making 36 saves in a game he didn't know he was starting until about 6pm. The Sabres were, as usual, out-Corsi'd in this game 72-44, so it's nice to know that Enroth can fill, at least sometimes, Miller's large pads. Enroth's backup tonight was local HARBORCenter employee and former Clarkson goalie Ryan Vinz, who went from a planning on attending the game with his brother to wearing #35 on the Sabres bench. One of the highlights of a moody locker room was Vinz's ear-to-ear smile, and we're glad that tonight was a positive milestone for at least one NHLers career.

Many of the players evacuated the locker room immediately, while the one that remained were emotional after the game, though for different reasons. Myers, being brought in to the league at age 19, said that Miller was always a player he looked up to. The trade seemed to crystallize a realization in Matt Moulson's eyes that he might be next, while Ted Nolan waxed emotional on Miller but especially on Ott, saying, "The first guy I spoke to when I got here was Steve Ott. You see what kind of character he is, and then you learn what type of man he is, so it's tough."

Despite the win, and earning their first three game winning streak of the season, the atmosphere was equal parts happy to watch winning hockey, and sad knowing that Miller's tenure in Buffalo was over. The crowd gave both players a nice ovation during their farewell video packages, but erupted with a standing ovation in honor of Miller.

Ted Nolan echoed the thoughts of many fans and players tonight at the end of his press conference, saying, "I'm a pretty emotional guy to begin with and when you start thinking about what transpired, it hits the heartstrings."

1. Will the Sabres regret starting Ryan Miller?
I'm not even sure how to answer this.

2. Can the Sabres keep Joe Pavelski in check?
In just under 20 minutes, Pavelski had one shot and zero points. Check.

3. Which Sabre adds or detracts the most from their trade value today?
Tyler Myers' three point night and +3 rating will certainly attract the eye of GMs around the league who feel the former Calder winner has been rounding back in to form lately.

I'm thinking our next Captain will be Ville

so we can trade him.