After yesterday's horrible Buffalo hockey debacle, some Avalanche fans from Mile High Hockey stopped by to offer their perspective and support.

Yesterday's game was not a fun experience for Sabres fans. It showed not only how little talent the team currently has, but in playing the Avalanche, who are just coming out of a long rebuild tunnel and into the playoff light, it showed how much further the Sabres have yet to go.

It wasn't any fun watching yesterday, as our game thread and most everyone's Twitter feeds were filled with misery. However, after the game, Avalanche bloggers from Mile High Hockey stopped by to offer their support, and some perspective on what it's like to go through a lengthy, but hopefully successful, rebuild.

First we had mfured20 talking about low points in the Avalanche rebuild, and how perspective can change once you focus on the little things going right. 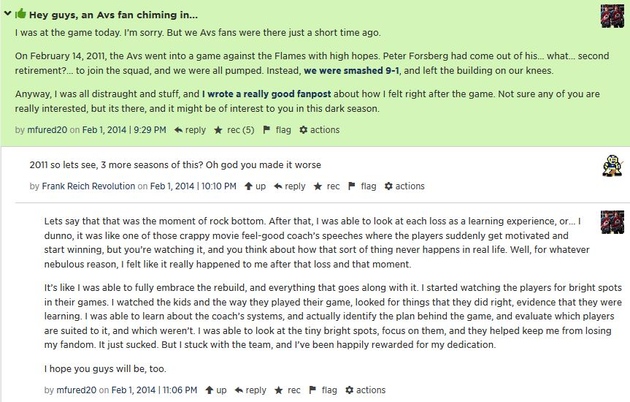 Another MHH writer, Andi D., expanded on the Avs loss from 2011 that started this whole conversation, and in addition to offering more advice for Sabres fans, talked about how it took some risky deals in conjunction with high draft picks to put the Avs rebuild over the top.

I always think it's interesting to get the perspective of the fans whose teams have been in the position that Sabres fans currently find themselves, like some sort of twisted form of sports therapy. It's a helpful reminder that these types of organizational turnarounds aren't usually completed in a year, or two, or even three, but if the fans patience is paid off, it will all be worth it.

Thanks to Andi and mfured for stopping by to share their thoughts. Tomorrow we'll be talking with some Edmonton bloggers from The Copper & Blue to get their opinion on a team whose long rebuild hasn't gone quite so well. The Sabres host the Oilers tomorrow night in a first of two battles for the #1 pick.