Despite being horribly outshot, the Sabres used two shorthanded goals and a heaping helping of luck to defeat the Blue Jackets.

Share All sharing options for: Sabres at Blue Jackets Recap: To heck with your advanced stats, Buffalo beats Columbus 5-2

Sergei Bobrovsky came in to the game tonight as one of the NHL's hottest goaltenders, the winner of six straight. He left tonight midway through the second period looking like one of the league's doormats after giving up three goals - two shorthanded - on just ten shots, and the Buffalo Sabres went on to end the Blue Jackets' eight game winning streak with a 5-2 victory.

Aside from the two shorties, the big story of the game was the fancystats. The Sabres were massively outshot by the Jackets, 38-22, and the possession stats were even worse, as the team's Corsi number was an unbelievable -60. Check out their Fenwick chart below and tell me which team won by three goals again? 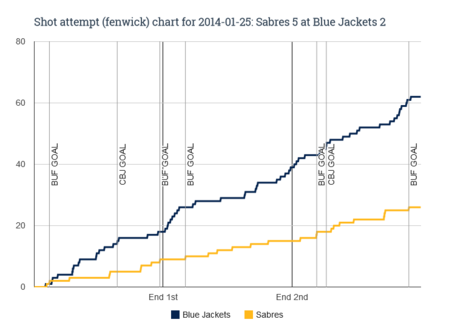 A big art of the team's game plan tonight apparently was relying on Lady Luck. A few posts helped Miller and the defense stymie the Columbus attack, but a few of the Sabres goals occurred thanks to either lucky bounces or the incompetence last night of Bobrovsky. The scoring opened with what Matt Ellis called his "Power Backhand", which was essentially the same move you used to pull in NHL06 when you'd accidentally hit the shoot button while facing the wrong way from 30 feet out. It evidently fooled Bobrovsky, as did Christian Ehrhoff's 180-degree slapper from the blueline, a shorthanded goal, which gave the Sabres the lead again after Derek MacKenzie tied it up.

The shorthanded fun would continue in the second period, as Marcus Foligno put another soft goal past Bobrovsky on the rush thanks to some distraction from Zemgus Girgensons, and the Columbus goaltender's night came to an end. When Steve Ott put home a rebound goal in the third, you felt like the game was all but over despite the massive shot differential, and Cody Hodgson put home the unassisted empty netter to seal the deal at 5-2.

The crazy part of the evening was just how dominant Columbus was in possession numbers, but before you go saying that this game disproves fancystats, we'd like to remind you of the words "sample size", "outlier", and "statistical anomaly". The Sabres had a heaping helping of luck, and scored two shorthanded goals in a game for the first time since 1997. If they played ten games with these kinds of possession stats and shot differentials, this was the only one they'd win.

On the positive side of things, the Sabres saw a nice performance tonight from some of their defensemen - Christian Ehrhoff's rounding back in to form with a three point night, and Chad Ruhwedel was solid in his season debut, acting as a very necessary blocked shots machine. Ryan Miller was once again excellent this evening, making some monster saves among his more pedestrian efforts to finish with 36 saves.

The Sabres did suffer some injury woes, as both Ville Leino and Drew Stafford left with upper body injuries. They'll try to luck their way into another win like this on Monday night in Pittsburgh (LOL).

1. Will the Sabres put anything past one of the NHL's hottest goaltenders?
Oh, did they ever. Bobrovsky gave up three goals on just ten shots before being chased midway through the second period after giving up his second shorthanded goal. He looked horrible, but the damage had already been done by the time he left.

3. How will the defensive pairings respond to replacing Mark Pysyk with Chad Ruhwedel?
Well, they won on the scoreboard, but the Sabres were outshot tonight by infinity, some of which has to go on the defense's hands. Ehrhoff scored and added two assists, and Ruhwedel played well and blocked a ton of shots in his debut, but Mike Weber took two more dumb penalties, so in the end things seemed to balance out.

1. Ryan Miller - 38 saves and back in form for Sochi
2. Christian Ehrhoff - a goal and two assists
3. Derek MacKenzie - one goal, one assist

It was too hard to choose, so here's the entire exchange about one of the Sabres best players this year.

The post has been huge for us this season.

He’s a UFA, need to trade him while his value is high.

A real stand up man.

I don’t know. He’s a good character guy. We need that kind veteran presence to provide leadership for the kids.

The good thing about Post is that you always knows where he stands.

And he’s never out of position.

Tough as nails, too

You could say he's got nerves of steel.

He's a bit statuesque on the ice, though.

Good point. They skate around him like a pylon.

I’m just saying. I’m looking at Hodgson too. Post can be a bad example

I heard he doesn't really resonate in the locker room

I believe he's always ready to stand up for his team.

He stabbed Enroth in the back in the shoot out

Yeah but at least he shows up every game. Never takes a night off. You can’t question his effort.

he’s not as good without his linemate

They make a rather solid pairing though.

Reporters love him. Magnetic personality in his post game interviews.

Plus he’s got an iron constitution.

One period you’ll see him at one end, and the next at the other

But where's the consistency?

He is very cap friendly…

Well, Post DID have that excellent tip-in on the Ehrhoff blast earlier...

Never takes any of the credit for saves or goals.