A look into the Buffalo Sabres' PDO (Team Save % + Team Shooting %) for the 2012-13 Season. Analysis is divided into the Ruff and Rolston coaching periods.

For the majority (if not all) of Sab(re)metrics entries, player-specific statistics have been the focus of discussion. While Corsi, Fenwick, and GVT can be discussed in a team format, I have purely introduced these statistics as a tool to compare various players against their NHL counterparts as a way to value their worth. Today, I want to introduce a team based statistic that can be used to measure a team’s performance over a given season. Named after the man (or username) who invented it (a la Corsi or Fenwick) this statistic is known as PDO.

PDO itself is a straightforward stat; merely the addition of the team’s cumulative shooting and save percentage over a given season (Eqn.1).

In other words, at game six, the Buffalo Sabres’ PDO would be the team’s SV% and SH% after six completed games; not just the PDO from game six. Over time, this stat regresses to one; so better (or occasionally classified as "luckier") teams tend to have PDOs greater than one and vice versa for poor or "unlucky" squads. The PDO for the Buffalo Sabres’ 2012-13 Season is shown in Fig.1, with Lindy Ruff’s final game and Ron Rolston's first game coached both notated. 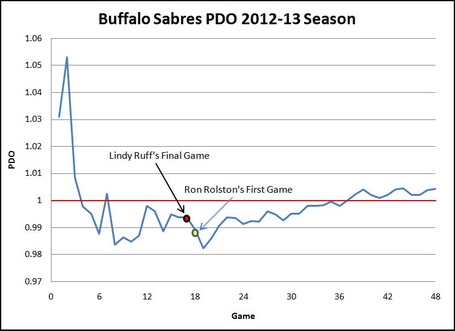 From a quick observation, the Sabres’ PDO was below one for 64.6% of the season, with their lowest PDO being reached in game 19 (0.982). After game 19, Buffalo’s PDO steadily increased for the rest of the season until it became above one in game 37. It should be noted that PDO graphs become smoother as more games are played during the season since it is a cumulative statistic, like a batting average in baseball. To determine which variable (SH% or SV%) was a driver for the PDO increase after game 19, the seasonal team SH% and SV% were plotted in Fig.2. 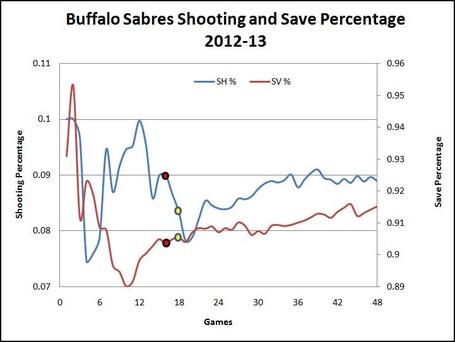 Fig. 2 shows Buffalo’s shooting (blue and right hand axis) and save percentage (red and left hand axis) for the 2012-13 Season. Comparing this plot to Fig. 1, it can be inferred that the improvement in PDO in the second half of the season can be attributed to the team having a better shooting and save percentage after game 19. For the early season plunges in PDO (around games 4 and 19), the lower values can be characterized by low save and shooting percentages for those specific points in the season.

Examining Figs. 1 and 2, a correlation exists between the coaching change and the improvement of PDO. While there is a lot of fluctuation during Lindy Ruff’s tenure (6-10-1) due to the smaller sample size of data, Ron Rolston’s coaching period (15-11-5) has a steady increase of PDO from game 19 to 48. To explore this further, Table 1 separates the average team save and shooting percentages into the coaching tenures of Ruff and Rolston.

Table 1 – Comparison of the Ruff and Rolston tenures during the 2012-13 Season.

Referencing Table 1, Buffalo’s average save and shooting percentages are .013 and .003 greater under Rolston than Ruff, respectively. This is interesting since the team actually produced fewer shots per game (3.108/gm) and allowed a similar amount of shots per game (.040/game) when coached by Rolston. Therefore, the more prominent variable for the increase in performance (and PDO) can be attributed to better team defense and goaltending, i.e. SV%. Since a .013 SV% difference equals one less goal per every 77 opposing team shots, Buffalo gave up one less goal for every 2.3 games under Rolston than when compared to Ruff.

Another aspect of PDO that could be examined was the game-by-game PDO of the team over the course of the season. Since team’s with PDOs greater than one are considered "good" and vice versa, the Sabres’ game PDO was tracked to see whether their winning games had PDOs greater than one and their losses (both regulation and overtime) had PDOs less than one. Table 2 includes the data from this examination.

As a predictor for winning or losing a game, the game-by-game PDO of the Sabres’ was correct 89.6% of the time. In other words, when the Sabres won, their PDO was greater than one and when they lost, their PDO was less than one 89.6% of the time. This is somewhat intuitive, since a poor team SH% and SV% during a game will more than likely lead to a loss as a good team SH% and SV% would lead to a win.

Overall, this article is an introduction to PDO, a simple stat that can be used as a predictor of a team’s success over a given season. While this stat worked as a good predictor for Buffalo last season, it may not work as well for other teams; for example, the Ottawa Senators last season placed first in SV% (0.933) and last in SH%(.0704) in the NHL, yet was a playoff team that reached the divisional round. Their final seasonal PDO was two thousandths (.002) greater than Buffalo’s, yet they achieved a much greater success in their season than Buffalo.

Some future work on this statistic is being done by Cam Charron who adds the a team’s Fenwick Close with their PDO to get a PDO/Fenwick Close Total, which I imagine would trend to 1.500 over the course of a season. Last season, he updated PDO on a week-to-week basis for all NHL teams over at nhlnumbers.com; I am not sure if he will do that this season, but it was an interesting read. Behindthenet.ca also used to have a PDO plotter on their website as well which is fun to check out over the course of a season, yet it was not functional last season. If you are interested in some past seasonal PDOs of the Sabres’ please click the links below:

Questions, comments, or concerns? Your feedback is welcome below :).