The Sabres have added a big number of prospects to their pipeline after picking 11 players in the 2013 draft. How does the organizational depth chart look now?

We last looked at the Buffalo Sabres prospect depth chart back on June 12, to see what the Sabres might be thinking come the draft.

Since then, the Sabres have added 11 new prosepcts through yesterday's draft, and announced that they won't be offering new contracts to David Leggio, Drew Schiestel, or Jacob Legace.

So how does the depth chart look now? We've updated it, and have highlighted the recent draftees in yellow. Remember, prospects are ranked roughly in order of potential and/or how important they are to the organizationin general. 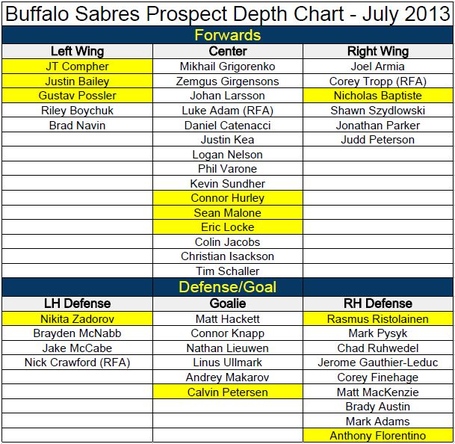 The big things to take away from this update is the immediate improvement at left wing and defense. Ristolainen and Zadorov take what was a pretty good defensive pipeline and turn it in to a great one, with plenty of depth on both sides. Meanwhile, the additions of Compher, Bailey, and Possler shore up nicely what was once a deserted wasteland at left wing.

So how do you feel about the baby Sabres depth chart after the draft? Still see any areas of glaring weakness? Or are you pretty happy with the way things are shaping up?