Sabres v. Senators - By the Numbers

Buffalo scores three times in third period to win their first game after the trade deadline.

Share All sharing options for: Sabres v. Senators - By the Numbers

If anyone thought the Sabres were going to tank the rest of the season after they traded away three players, they were wrong. The Sabres pulled off an impressive come from behind victory with three goals in the third period against the Ottawa Senators on their way to a 4-2 home win.

Not all of the stats were favorable to the Sabres, but the only stats that matter are four goals scored and two allowed. Buffalo played an inspired game that was led by the physical play of Steve Ott and Patrick Kaleta. Ott was rewarded for his inspired play when he tied the game on tip of a Mark Pysyk shot to tie the game in the third period. Matt Flynn and Jochen Hecht scored late in the third period to put the game away. 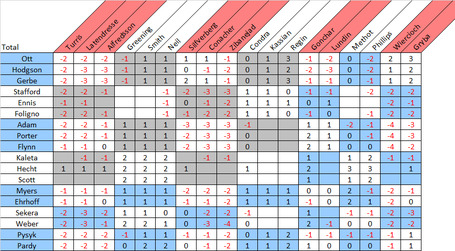