Now that the trade deadline is over, let's analyze the departures and additions to the Buffalo Sabres using GVT, Player Usage Charts, and any other fun stats we can find.

Share All sharing options for: Sab(re)metrics: The Trade Edition Part 1

With the trade deadline passed and another member of the "Rochester Core" departed, I wanted to take a glance at the assets the Sabres have acquired at this past deadline, as well as their recent departures. Using Player Usage Charts (formerly known as OzQoc Charts), GVT, and some other fun Corsi statistics, let's take a look at the work the Sabres' Front Office has completed over the last few days. For Part 1, I will discussing our recently traded players.

First off, to analyze the statistics of who has left our team, we can examine the Player Usage Chart (PUC) for the Buffalo Sabres this season and compare it with the players who the Front Office traded. For a brief explanation of what the Player Usage Chart documents, I posted an explanation that I used last season (hence the reference to Ruff) when it was first introduced on this site:

To understand how Ruff uses his forwards and defense in certain even strength situations, the Player Usage Chart plots the Relative Corsi Quality of Competition (y-axis) of a player versus their Offensive Zone Chart percentage (x-axis). In the version I am presenting today (as well as versions seen here and here), a bubble chart will be used to plot the Corsi Relative of each player examined. For a definition of each of these terms, read the list below (taken from behindthenet.ca):

The PUCs posted are all taken from Rob Vollman's hockeyabstract.com, which is extremely intuitive and a huge time sink once you toy with all the bells and whistles (bubble size by TOI, color by GVT, Corsi, etc.). Compared to charts of the past, the bubble sizes of the chart below represent the amount of time a player plays on a nightly basis (big bubbles are for big minutes and vice versa). An extra caveat to these PUCs is the breaking up of the chart into quadrants, where quadrants 1, 2, 3, and 4 represent players who seeing Two-Way, Shut Down, Less Sheltered, and Sheltered minutes. Of course this explanation is a little simplified, but generally speaking, players in the upper left hand corner (quadrant 2) are seeing tough match-ups (Ott, Weber, Regehr) while players in quadrant four are getting easy minutes (Grigorenko).

Below are two PUCs, one for the whole Buffalo Sabres team this season, and the other for the players we traded away over the past week. Both charts only include players who have played 10+ games, so any player who was traded and did not play 10 games for our team this season will not be included (sorry TJ Brennan). Clicking on either chart will give you a bigger and better view. 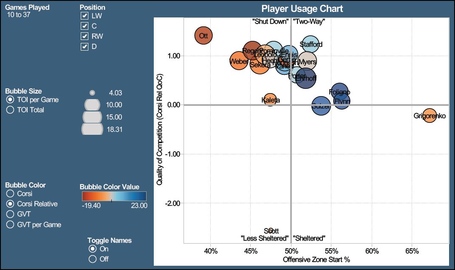 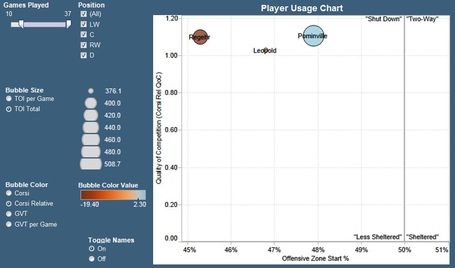 From Figure 2, we can see that Jordan Leopold, Jason Pominville, and Robyn Regehr all played rather tough match-ups (Shut-down minutes). Specifically, Leopold and Regehr saw the hardest competition according to Corsi Rel. QoC for defensemen and saw similar Offensive Zone (OZ) Starts as Andrej Sekera and Mike Weber. Both players had negative Corsi Relative, especially Regehr who was last on the team. This really shows how much of an offensive drag Regehr was when he was on the ice, and that we were really relying on him to play shut-down defense since he struggles to do much else (shoot, pass, skate) at this point of his career.

Continuing to look at Figure 2, Jason Pominville was a top forward in Corsi Rel. QoC (3rd) and OZ Starts (4th), but he also had a positive Relative Corsi, unlike Leopold and Regehr. This is slightly different than how he was used last year, where he was getting a little easier minutes (roughly 8% more OZ starts). Comparatively, its respectable to have a positive Relative Corsi while playing tougher minutes, since it would be easy to assume that tougher assignments against better competition would hamper your offensive ability. This could be due to his primary linemates this season (Hodgson and Vanek), but it could also be due to Pominville just being a good player.

I also have posted a table that ranks the players by GVT, but includes all the data found in the above charts as well. All traded players are highlighted.

From Table 1, we can see that Jason Pominville ranked in the top three in forwards with GVT, Jordan Leopold was average on the team, and Robyn Regehr was near the bottom of all Sabres. According to GVT, Robyn Regehr's 0.0 GVT rating means that he could be adequately replaced by any fringe NHL defenseman that exists in the NHL. One could disagree with that assessment (since GVT never seems to look favorable upon defensive d-men), but it is a stat that can be used to understand his play to the team this season. Using Wins Against Threshold (WAT), Pominville would have accounted for almost 2 points this season, while Leopold was worth 0.6 points, and Regehr was worth 0.

Extrapolating over a full season, Pommers would roughly have accounted for 4 full points this season (~11.5 GVT), which is about 1 point less (15.6 GVT) than he was last season. Continuing to extrapolate, Leopold would have had a very similar year as he did last year (7.1 GVT last year, 6.5 GVT this year, 3 points), while Regehr actually would have had a better year (was negative last year, zero this year). Of course this is assuming all of their production would be linear, which is practically never the case with NHL players.

Overall, we traded a really solid, all situations player in Pominville, and two defensemen (Leopold and Regehr) who have been solid in the past, but currently were having substandard seasons and were soon-to-be UFAs. Will this hurt the team for the near future? If nothing is done to replace what Pominville brought to the team, this will be true, but both Leopold and Regehr could more than likely be replaced by a mid-level FA signing and AHL ready D-man (such as a Mark Pysyk). Perhaps our cache of futures will be used to acquire a NHL top six forward from a team who is hand-cuffed by the new Salary Cap? Only time will tell.

In Part 2, I will examine the abundance of futures and prospects that were acquired at this past deadline, and predict what you could expect if we were to keep all of those picks and draft top 60 talent for three straight years. If you have any questions regarding hockey stats, feel free to comment below.