Sabres v. Canes - By the Numbers

Scoring chances and Corsi Ratings in the Sabres 4-3 loss the Hurricanes on Tuesday night.

Share All sharing options for: Sabres v. Canes - By the Numbers

They say you can't judge a book by its cover. This was definitely the case on Tuesday night when the Buffalo Sabres lost 4-3 to the Carolina Hurricanes. The stats indicate the Sabres should have won this hockey game, but once gain they found themselves getting another notch in the loss column. Even when the Sabres play a good hockey game, they make a couple of mistakes that end up in the back of the net. While there were positives to take from this game the Sabres need to start winning hockey games or start looking towards next season.

The line of Tyler Ennis, Nathan Gerbe and Steve Ott struggled in this hockey game, but the rest of the team was able to generate shots and scoring chances. The play of goalie Justin Peters should not be discounted, but the Sabres need to start burying some of their chances. 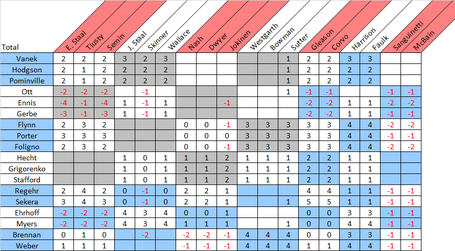