Sabres v. Devils - By the Numbers

Some advanced stats from the Sabres 4-3 shootout victory on Saturday afternoon.

Share All sharing options for: Sabres v. Devils - By the Numbers

Jason Pominville scored twice and Ryan Miller made 28 saves to help the Sabres to their third consecutive victory on Saturday afternoon. This might have been the Sabres best game since they opened the season with a convincing win over the Philadelphia Flyers. I thought the Sabres played a decent game although they still take too many penalties and are inconsistent in their own zone. The team appears to be headed in the right direction, but still have plenty of work to do. 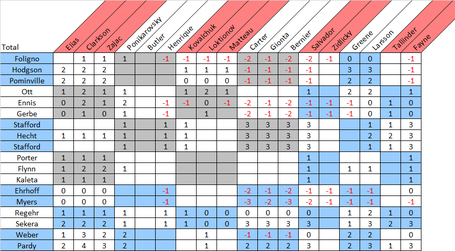