Sabres v. Canadiens - By the Numbers

The ugly truth about the Sabres 3-2 overtime victory in Montreal on Tuesday night.

Share All sharing options for: Sabres v. Canadiens - By the Numbers

I think it would be fun to somehow avoid the outcome of a Sabres game before looking at the stats that will be posted below. Imagine what you would predict the score to be by looking at the Corsi/Fenwick. The other day my five year old son was amazed when the Blackhawks scored eight goals in an 8-1 win over the Dallas Stars. After looking at these stats I would have predicted the Sabres lost 9-1, maybe even 10-1. Instead the Sabres found a way to win. I have to admit, it feels good to be talking about a win.

There were plenty of negatives to take away from this hockey game. They were thoroughly outplayed for most of the game, they gave a two goal lead in the third period and they lost Thomas Vanek to injury. There were definitely some positives to this hockey game as well.

Despite the ridiculous disparity in shots attempted by the two teams, the Sabres limited the Canadiens scoring chances. They kept most of the shots outside and they blocked a lot of shots as well. Mike Weber did exactly what he needs to do in order to be successful in the NHL, he blocked shots. When the Canadiens did get scoring chances, Jhonas Enroth was up to the challenge. He played another great game in goal for the Sabres.

I think most of realize the Sabres were lucky to get two points in this game, but lets just enjoy it and let the coaches worry about the negatives.

Note - The chart below includes only 5-on-5 scoring chances 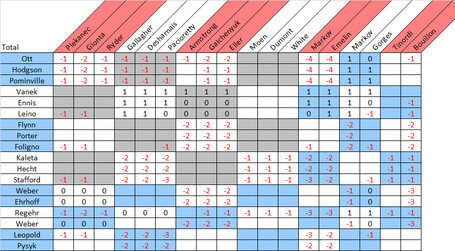