Sabres v. Senators - By the Numbers

A statistical breakdown of the Sabres 4-3 overtime loss to the Ottawa Senators on Saturday afternoon.

Share All sharing options for: Sabres v. Senators - By the Numbers

It is becoming more and more difficult to watch the Buffalo Sabres. On Saturday, they score twice in the first period and look like they are on their way to another home victory. Unfortunately, a hockey game consists of three 20 minute periods. As bad as the Sabres have been this season, the second period on Saturday was the worst period they have played all season.

The Sabres allowed three second period goals, and allowed 10 second period scoring chances. They were actually lucky to come out of the period down by only one goal. They did manage to get a third period goal before losing on a power play goal in overtime.

It is hard to find positives in a heartbreaking loss, but not everything was bad in this game. Most of the team played well for most of the game. The Sabres top line struggled most of the game and were thoroughly outplayed at even strength, but the line of Hecht, Stafford and Gerbe played very well.

The return of Leino has given the Sabres four lines that can contribute on any given shift. It would be nice to have a top line that contributed every night, but having four lines contribute is a nice plan B. 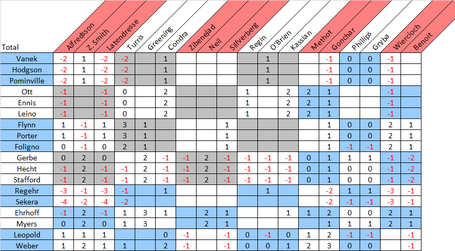