Sabres v. Panthers - By the Numbers

Some advanced stats of the Sabres 4-3 shootout victory over the Florida Panthers on Thursday night.

Share All sharing options for: Sabres v. Panthers - By the Numbers

The game almost slipped away from the Buffalo Sabres until Thomas Vanek and Jason Pominville scored in the shootout to give Buffalo a 4-3 victory in Florida on Thursday night. Once again the Sabres had less shots and less chances than the opponent, and once again the Sabres came out victorious. This must be what we were talking about when we said the Sabres needed Ryan Miller to be good if they wanted to win hockey games. Miller was far from perfect but in the end he was the difference. It was also great to see Nathan Gerbe get on the board, not one but twice in the win. 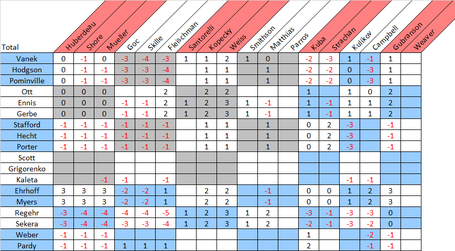