Scoring chances from the Sabres 4-3 loss in Ottawa on Tuesday night.

It is starting to feel like a broken record talking about another Sabres loss. This time it was the Ottawa Senators that sent the Sabres home searching for answers. The Sabres scored three goals and Thomas Vanek didn't have a point. Most times that would equal a win, but not when you are struggling as badly as the Sabres are.

* Note - There is no official stat kept for scoring chances, although they are tracked on the Sabres broadcast. The stats on the broadcast and those that I calculate are usually fairly close. This was not the case in this game as the broadcast actually thought the Sabres had more chances than the Senators. 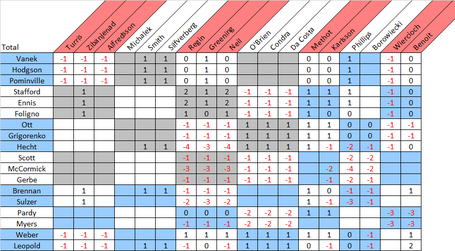