Sabres v. Lightning - By the Numbers

A look at the scoring chances and Corsi Ratings for the Sabres in their 2-1 win against the Tampa Bay Lightning on Tuesday night.

Share All sharing options for: Sabres v. Lightning - By the Numbers

Once again they gave up an early goal, but this time they were able to dig themselves out of an early hole. Cody Hodgson tied the score and Tyler Myers gave them a lead in the third period. At that point they relied on the services of Ryan Miller and he was up to the task.

It was great to see the Hodgson-Vanek-Pominville generate some shots on goal and some scoring chances. This line was clicking early in the season, but they have struggled to find a rhythm of late. Tonight they were the Sabres best line and were on the ice for both Sabres goals.

The Stamkos line was as advertised in this game. They generated plenty of opportunities for the Lightning, but they were only able to beat Miller one time in the early part of the game.

A few noticeable differences between the Lindy Ruff era and the Ron Rolston era. Jochen Hecht earned less than six minutes of time and he did not play on the penalty kill. It appears that Kevin Porter replaced him as a penalty killer in this game. The Lightning were 0-for-6 on the power play. Coincidence?

Another difference was no sign of Marcus Foligno on the power play. This could change if the Sabres are afforded more power play time. The Lightning were only given one penalty in the entire game. 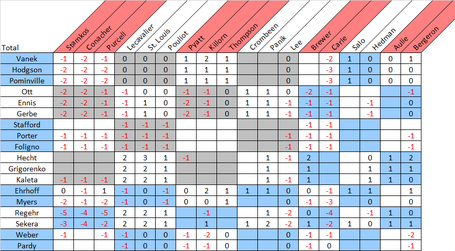