Scoring chances and Corsi Ratings for the Sabres in their 3-1 loss to the Leafs on Thursday night.

This team is hard to watch. There was hope that we would see a different Buffalo Sabres team with a new coach behind the bench. That hope faded away as the Leafs scored twice in the second period to beat the Sabres 3-1 in the first game of the Ron Rolston era.

I have been able to add Corsi Ratings to this post with the help of Robert from Jewels From The Crown. Robert has developed a spreadsheet that makes it easy to figure the Corsi Ratings.

The Corsi Ratings can be a bit deceiving. The Sabres seemed to do well controlling the puck and they were also able to get shots in the offensive zone. Unfortunately most of the shots were not quality scoring chances. The scoring chances will be listed below. 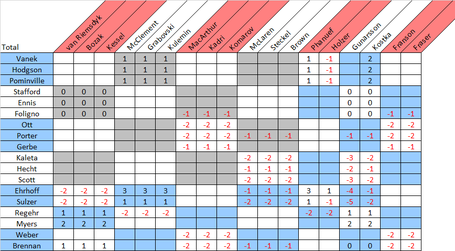