Scoring chances from the Sabres 7-4 win over the Boston Bruins on Thursday night.

The only thing that matters is the final score. This was never more evident than it was on Thursday night. The Sabres were dominated most of the game, but the heroics of Thomas Vanek and Ryan Miller gave the Sabres a convincing 7-4 victory in Boston. Vanek scored three goals and added two of the prettiest assists you will ever see to earn his second five point game in six games played.

Ryan Miller allowed four goals and still played one of the best games I've seen him play. Miller made at least three incredible saves in the third period to help keep the Sabres in the game. Miller made 38 saves in all and many of them were of the spectacular variety. 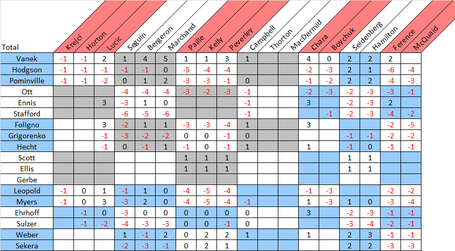