Scoring Chances from the Sabres heart breaking defeat to the Pittsburgh Penguins on Hockey day in America.

The Buffalo Sabres probably deserved better on Sunday afternoon. The Sabres battled back from early two goal deficit, and actually held a one goal third period lead, before dropping a 4-3 decision on home ice to the Pittsburgh Penguins.

In the end it was mistakes in their own end and the inability to convert their chances that did the Sabres in. The stats below will show that Buffalo played really well in the final two periods, but they only converted twice on 17 scoring chances in the final two frames.

I am usually not described as an optimist, but there are definitely positives to take from this game. They could have quit when they were down 2-0 in the first two minutes and they didn't. They created plenty of scoring chances on a decent Penguins team. The third line scored a goal. There other positives to take from this game as well. Post your positive views in the comments below. 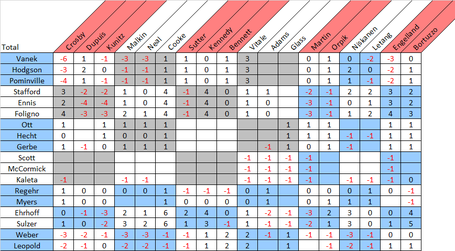