Share All sharing options for: The Buffalo Sabres' 2012-13 Roster History

Writer's Note: This article is an update of a fanpost I originally posted on 8/12/2011.

Back in the Summer of 2011, a fan from Broad Street Hockey was inspired by a fan of Fear the Fin who had built the current roster history for the San Jose Sharks. This fan of BSH then developed the Flyers' Current Roster History while adding an analysis of how the Flyers' original draft picks have been used to develop the current team. With both of these fans for my inspiration, I built the 2011-2012 Sabres roster as it is shown on sabres.com in this fanpost. Since this was originally posted in August of 2011, I decided to update the roster tree and repost some new analysis on our current roster history.

To build a current roster history, one must find out how every player currently on a hockey team (in this case, the Sabres) traces back to an original draft pick for that team. In this case, an "original draft pick" refers to one given to the team by the NHL, and not one acquired in any other way (trade, future considerations, hostile takeover, etc.). Below is the current roster history for the Buffalo Sabres’ 2012-13 Roster. 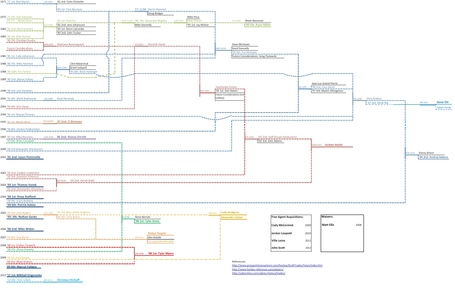 As a side note, I must admit that I could not find the future considerations for the Stephane Beaureguard trade after scouring the internet (though I found an interesting story on his trade history…but let’s not get too off topic). It is not common that these future considerations are not fulfilled, but this seems to have happened more than once throughout NHL history, so it is not a specialized random event.

To explain the chart a bit, any name that is big and bold is a current roster player. Player trees are color coded, and any name in parenthesis is a player that was drafted with that pick, but was not drafted by us. All trades are listed with the team name as well as the month and year the trade was completed.

Observing the Roster History, we can see some interesting trees that have been created from our current roster of players. First, just like the BSH post, we can analyze how our own draft picks have been used to create our current team. 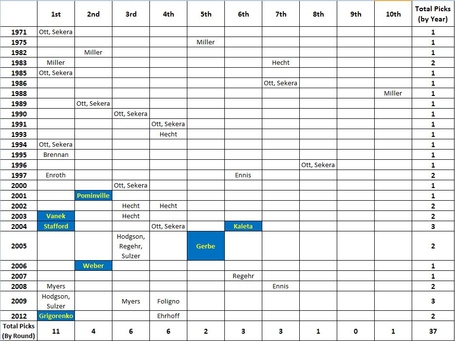 In the chart above, all the highlighted and bolded names are actual players on our team that have been drafted with our original draft picks. As you can see, 7 current players on our roster (Gerbe, Grigorenko, Kaleta, Pominville, Stafford, Vanek, and Weber) were original picks that belonged to our organization. This may seem low, but compared to the Philly (3) and San Jose (2) roster charts, we have at least twice as many current roster players who were developed using our original picks. We also have 11 picks from the first round that have helped to build this current roster, which is three more than last year’s squad. The draft years that have contributed the most to this current team are 2004 and 2009, where three draft picks can be traced to current players on the roster.

In comparing the Philly and San Jose roster trees, the Sabres do not have many notable NHL players within the league whose rights (players in parenthesis) had belonged to them at one point in their own roster tree. The players from the roster tree who have played in the NHL include Byron Dafoe, Eric Daze, Jeff Drouin-Deslauriers, Jim Slater, and Jarret Stoll. Overall, the Sabres have not traded away any draft picks that have turned out to be superstars to build the current team.

To break the roster down further, we can analyze how many of the original Sabres draft picks can be traced back to certain players on this roster. In this case, there is an obvious relationship between the size of the roster tree branch a player belongs on and the amount of original draft picks that can be traced to that player. Andrej Sekera accounts for 10 original draft picks, while Steve Ott comes in a close second with 9. To see a full list, refer to the chart below:

- By the Numbers: 37 original draft picks account for 18 players on our current roster (This is one more original pick than last year’s roster). There were increases in the amount of draft picks used in the first (37.5%), third (50%), and fourth (50%) rounds to build this year’s team in comparison to the 2011-2012 team, which had a higher amount of second round picks (50%).

- First Round ROCKS!: 11 of our original 37 draft picks are first round draft picks. This number decreases as the rounds progress except for rounds 2, 6, and 7. 43.3% of the original draft picks come from draft round 4 or higher, including two picks that are from rounds that currently do not exist in the NHL Draft (Rounds 8 and 10).

- Most Picks per Player?: From the chart above, the June 2012 trade for Steve Ott and the 2004 drafting of Andrej Sekera can be traced back to 9 and 10 original draft picks from the Buffalo Sabres, respectively. Including Jochen Hecht (5) and Ryan Miller (4), the Sabres can attribute 51.4% of their original draft picks to four players on the team.

- Good Value?: Three 1st round picks, one second, and two thirds (among other later round picks) can be traced to the acquisition of Steve Ott. Add a fourth to this, and you get Andrej Sekera. Was all that worth it? It is hard to say, since these original draft picks were held by different GMs who scouted talent in different ways. Would you trade 9 picks for a Steve Ott today? Of course not, but Punch Imlach’s first round choice in 1971 probably should not be directly valued to a trade that occurred 41 years after it.

- Bargain Bin: Again, it is difficult to quantify original picks to current players, but to see that we were able to acquire a 2nd round pick (Jake McCabe) and Robyn Regehr for an original 3rd and 6th round pick is pretty cool…especially if McCabe continues to progress as a prospect.

- Good Times, Great Oldies: Original draft picks from 2000-2009 have all contributed to our current team along with a draft pick that traces all the way back to our second draft in the league (1971). Draft picks from every decade of our team history can be seen to contribute to our current roster. We can even trace both of our current goaltenders to original picks that were used to draft goalies in 1975 (Don Edwards) and 1997 (Mika Noronen).

-The French Connection Lives On: Steve Ott and Andrej Sekera can both trace their Sabres' lineage back to the great Rick Martin. This was the most interesting thing I found when researching the Sabres' transaction history to make the roster tree...it is also by far the coolest. You will always be missed Rico.

- Trade Partners: From the list, the LA Kings, Calgary Flames, and Vancouver Canucks were our most frequent trade partners, with 3. We made two trades with Tampa Bay, Winnipeg, St. Louis, and Chicago while we made one trade with Atlanta, Pittsburgh, Detroit, Florida, New York Rangers, New York Islanders, Washington, Edmonton, San Jose, Nashville, Dallas, Philadelphia and Phoenix.

In total, the Sabres have made 29 trades with 20 teams to shape their current roster, which is much less than the amount of trades it took San Jose (54) and Philly (45) to make their 2011-2012 rosters (information for these teams’ current roster histories is unknown at press time). From this information, it could be postulated that the Sabres either use less of their original draft picks to form the current roster, or they prefer to hold onto draft picks as opposed to trading them for current players. This statistic could also correlate with the amount of players the Sabres currently have on the team that come from original draft picks; for example, since the Sabres have more than twice the amount of players on their team that come from original picks when compared to Philly (3) and San Jose (2), they may need twice as few trades to make their current roster. Of course this analysis is from a very small sample size, but it would be interesting to see how this plays out with other roster histories in the NHL.

Overall, this analysis is one of the more interesting things I have explored with the Buffalo Sabres. It is fascinating to visualize how a NHL roster is built, and to see how draft picks from over 40 years could be linked to a current player you watch four times a week. If anyone has any recommendations on some other future analysis I could do with this work, let me know below.