Stronger possession numbers and a nose-to-the-grindstone type of game couldn't pull the Sabres past the Canadiens as Buffalo fell 3-2 yesterday at the Bell Center.

The numbers looked better, but at the end of the day, the letters didn't change.

Despite out-shooting, out-hitting, and out-faceoff-ing the Montreal Canadiens last night, the Buffalo Sabres still left the Bell Center with an L instead of a W.

It was a step in the right direction for the struggling Sabres, who gave the division leading Habs all they could handle, but they were ultimately undone by some timely Canadiens scoring at the end of the second period and never recovered en route to a 3-1 loss.

For only the fourth time all season, the Sabres came out on top in the possession game, sporting a 52.6 FF% to Montreal's 47.4%. It wasn't a huge margin, but for a team with the worst possession stats in the league going up against a red hot opponent, it was a big step in the right direction.

Buffalo's top line of Moulson-Hodgson-Stafford put forth a better effort tonight, putting five shots on net, and the defensemen came up strong with timely pinches and eight shots between them. Check out the beauty of a Fenwick chart from extraskater.com below. 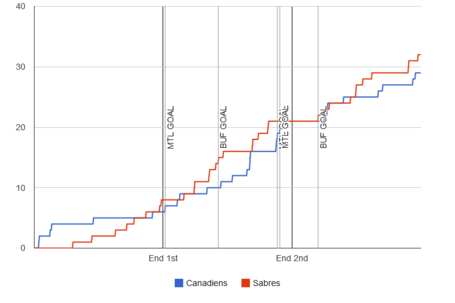 When the Sabres drafted Zemgus Girgensons, the phrase "power forward" was occasionally tossed around regarding his hard-nosed style of play, and last night we saw what will hopefully be the first of many power forward goals. Following a puck that was chipped in to the Montreal zone, Girgensons outdueled PK Subban for control, then went right around the all-star defenseman before flying past Carey Price and putting the puck into the net with a diving effort.

It was a beauty of a goal that resulted in an instant classic call from Rick Jeanneret: "Check out his nose! It was on the grindstone so long , there can't be anything left of it!" Check out the highlights in the video below.

1. The Sabres have scored 8 goals in their last 7 games. Can they find their offensive spark tonight against one of the best goaltenders in the NHL?
Despite outshooting Montreal 25-19, Buffalo could only put two shots past Carey Price. Still, two goals is an improvement from their recent efforts...

2. Will Enroth continue his strong play at the Bell Center?
Not exactly. Enroth made just 16 saves on 19 shots for a. 842 save percentage. The third Montreal goal was a compete breakdown that no goalie could have stopped, but Enroth needs to make a save on one of the first two in order to give his team a chance. We said in the preview that Buffalo needs excellent goaltending every night in order to win, and tonight they didn't get it.

3. The Ott-Leino-D'Agostini line was dominant in Corsi versus NYR. Can they play the same strong game against the Habs?
Despite being a -2 tonight, this line had decent possession numbers (about six shots for to eight against) but the Corsi heroes tonight were the top line of Moulson-Hodgson-Stafford. Imagine that, your top line outplaying the other team! What a novel concept.