The Buffalo Sabres look like an actual NHL team with a 4-2 victory over the Winnipeg Jets on Tuesday night.

The Buffalo Sabres showed some things against the Winnipeg Jets that they haven't shown all season. By the end of the third period, the team looked like an actual functioning team in the National Hockey League and left the ice to a raucous ovation the likes of which hasn't been heard in a long time at First Niagara Center. The Sabres 4-2 victory over the Jets could really be split into two sections.

The Buffalo Sabres had 19 shots on goal in the first period. That isn't a typo, they really had that many shots. Five times in the 2013-14 season, the Sabres have had 19 or less shots in a game. The team's Corsi number was just as impressive at +19, or 71.4%. The Sabres highest full game Corsi for percentage was 60.2% against the Maple Leafs on November 29th. Here's what that first really looked like in chart form. 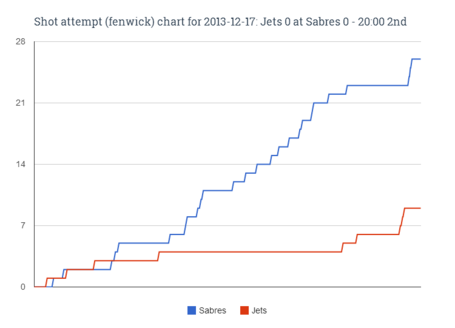 Even with all of those offensive scoring attempts, the Sabres still couldn't find the back of the net. The Jets did to start the second period as Mark Scheifele scored twice in a span of 36 seconds. The Sabres did find the scoresheet at the ten minute mark of the second. But that lack of scoring has been the Sabres main issue all season. Good Corsi stats don't mean anything much in terms of winning when you can't finish on some of the chances that are getting thrown at the net.

That was all written before the start of the third period. Who can be blamed for showing a bit of pessimism given that the Sabres have put out a consistently terrible effort for most of the 2013-14 season. The third period of Tuesday night's game can only be described as:

The Period Where Everything Finally Clicked With The Sabres

Still down 2-1, the Sabres scored less than a minute into the start of the period on a Marcus Foligno wrist shot that was setup by a Cody Hodgson pass from in the corner. The Sabres took their second lead of the game just under two minutes later on a Matt Moulson power play goal. Finally, the Sabres got their first two goal lead since November 15th against Toronto with a Matt Ellis tip-in goal with six minutes left in the period.

The Sabres were able to check off a couple of terrible statistics that have been hanging over this team for this season:

- The Sabres have their first regulation win in over a month.

- They broke their 0-20-0 streak they had when they trailed after two periods.

- The Sabres score three goals in a period for the first time all season.

- The Sabres score four unanswered goals for the first time since January 31, 2013 against Boston. (h/t to bgred105 for this one)

- Steve Ott and Marcus Foligno break scoring droughts that dated back to November 15th, the last time the Sabres had a regulation win.

While this isn't much of an indication of where the season is heading, it was entertaining to watch the Sabres actually look like a competent team on the ice.

Three Stars Of The Game

After the game we'll see Stafford's skin rip apart and Girgensons will be standing inside.
We've cloned and replaced each member of this team with Girgensons. At least the effort looks like it.