Kings vs. Sabres Recap: Sabres Somehow Pull Out A Win

The Buffalo Sabres were out shot 45-17 by the Los Angeles Kings but still managed to pull out a 3-2 shootout victory. The victory was their first at home this season in 10 games.

Share All sharing options for: Kings vs. Sabres Recap: Sabres Somehow Pull Out A Win

Let's start with a hypothetical situation. Picture you are watching a game in which a team gets out shot by 11 shots in the first period, another 12 shots in the second period, and a total of 28 shots in the game. The same game has that team sporting a -45 Corsi number and a -38 Fenwick. The fancy stat guys would look at that and say that team had a terrible game and was most likely getting blown out of the water.

So how exactly did the game end with a stick salute at center ice and the Sabres defeating the Kings 3-2 again?

The Buffalo Sabres looked like a basement team for the first 40 minutes of their game against Los Angeles. But, with Ryan Miller between the pipes, they were tied with the Kings after the second period and in the game the entire time. Miller was the game's first star, and if it was possible, he should have been stars two and three as well. He made 43 saves in the winning effort and basically kept the Sabres a float for much of that game. "We have to be in those games. We had a chance late in the second and third period and we've got to find a way. I thought we had good energy in the third period, I was happy to see that. The guys stepped up when they needed to in the shootout and you're not always going to get out in this league nursing a lead so it's good to pick up the point."

Cody Hodgson was the offensive star for the Sabres as the Sabres only two goals in regulation. Both goals were a result of hard work in front of the net and for Hodgson his fifth career two goal game. "Obviously, to win a game like that when you out shot bad and out played, but when you have one of the best goalies in the world, that's what happens. It feels awesome just to get that extra point."

The Sabres did benefit from a cold goaltender in the shootout. Jonathan Quick had to leave the game with 1:20 left in overtime and Ben Scrivens came in relief. Scrivens didn't face a shot in overtime and took the loss without ever officially having to make a save. It's rare for that to happen, but Sabres fans can harken back to last year when Ryan Miller had to come in cold for Jhonas Enroth in his coffee game and didn't face a puck in the loss.

One of the underlying themes of this game was the battle of two goaltenders that are vying for a spot on the US Olympic hockey team. Ryan Miller and Jonathan Quick have been penciled in as two of the top three guys fighting for the start. Quick won the last battle last week with his 2-0 shutout at home, but Miller made a strong case with his 43 save performance.

"There's a fair amount of hockey left with that. Hopefully, they are just looking at the way you're playing. Again, it's not really about making the team right now for me. For me, it was about coming off Anaheim and making a statement and rebounding from that game."

If the Sabres weren't able to pull out the win, it would have been the third time franchise history that the team would have recorded a streak of 10+ winless games at home. The 9 game home winless streak is the third longest in history.

Rick Jeanneret Between The Benches

We would be remiss not to mention what could have been the lone highlight of the game, this picture of Rick Jeanneret calling the game between the benches. 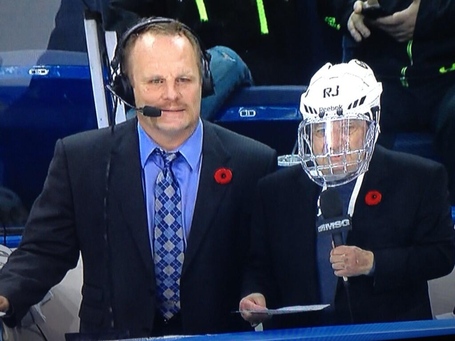 Thanks to a broken elevator, the broadcast had to do some last minute switching around to be able to get RJ to call the game. It's also something you'll probably never see again.