How do you measure puck possession, and why are the Sabres so bad at it? - Part II

In Part II of our puck possession series, we take a look at which individual players on the Sabres are hurting the team's possession numbers most.

Share All sharing options for: How do you measure puck possession, and why are the Sabres so bad at it? - Part II

A few weeks ago, we wrote an article introducing the concept of puck possession and the Fenwick For % stat, and showed that not only are the Buffalo Sabres the worst team in the league in FF%, but they're historically bad in the puck possession department.

Fast forward three weeks, and things haven't gotten much better. The Sabres still sit dead last in the NHL in FF% at 39.1%, and since we wrote that first possession article, the Sabres have gone 2-7-0. Since we know that the team as a whole is bad, today we'll take a look at individual FF% stats to find out which players are struggling most in the possession department. As always, we're using the fantastic site Extra Skater for all our possession stats.

How do you measure puck possession, and why are the Sabres so bad at it? Part I 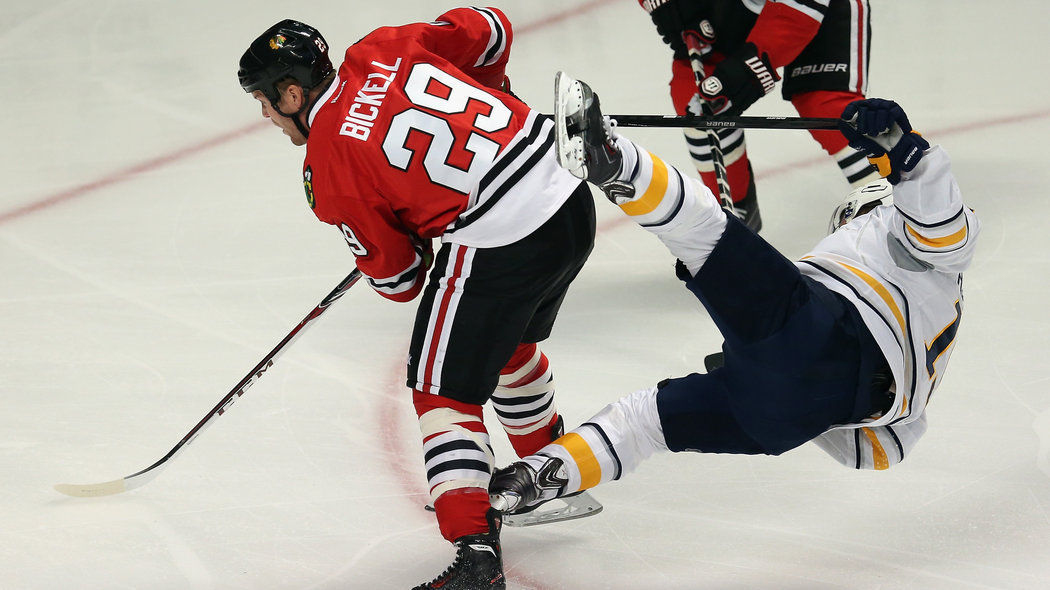 Part I of our puck possession series explains exactly what "puck possession" means, how it's measured, and the concepts behind the Fenwick stat you'll be hearing a lot about this year.

We'll start with the Sabres top offensive line. Gotta be Hodgson, Vanek, etc, right? Nope - according to the possession numbers, the Sabres best line has been Johan Larsson, Brian Flynn, and Zemgus Girgensons. In fact, along with Marcus Foligno and Kevin Porter, these are the only forwards with FF% numbers above 40%. In layman's terms, those five players are the only forwards who don't allow the other team to take over 60% of the game's shots when the score is close. Yes, they're often playing against lesser competition than other forwards, but anyone who's watched the games should be able to see that this group passes the eyeball test as to who the Sabres best forwards have been,

Speaking of that supposed top line featuring Cody Hodgson, the de-facto #1 center ranks only ahead of John Scott, Cody McCormick, and Patrick Kaleta in FF%. He, along with Mikhail Grigorenko (not surprising) and Ville Leino (a little surprising) are the three worst top-9 forwards on the team in this regard. Hodgson ranks third on his team in giveaways, but so does Sidney Crosby this year. The biggest reason for his poor possession numbers is that while Hodgson is on the ice, the opposing team has sent a whopping 173 shots towards the net - more than any other forward in the NHL. Oh, and the second worst in Fenwick Against? Tyler Ennis.

And let's not forget about the defensemen - if we're going to dive into this turd sandwich, we might as well eat the whole thing. You don't need fancy stats to know that Mike Weber was having a horrible season, but his 33.1 FF% ranks only ahead of Nikita Zadorov - yes, the rookie hasn't looked too out of place, but he's still giving up a large number of shots while only generating a few.

The worst offender amongst Buffalo blueliners, however, is Tyler Myers, whose 152 Fenwick Against (shots directed toward the net against) ranks 10th worst in the NHL for defensemen.  Among players with 18+ games played, Myers ranks worst in the entire league in FF%, but luckily he signed that hundred year contract extension so he has time to turn things around.

Among players with 18+ games played, Myers' Fenwick For % ranks worst in the entire league.

Before you hurl yourself off the Grand Island bridge, take a second to keep reading, because there are some bright spots on the blue line. We've been touting Christian Ehrhoff's praises for a while now, but his partner Mark Pysyk has hung with him admirably, in fact, they're two of the top three players on the team in FF%. Rasmus Ristolainen's full season numbers don't look great, but he's starting to turn things around in the Fenwick area after a brutal start to the season.

When you look at the numbers all together, it's a pretty pathetic situation for the blue and gold. Nobody on the team is even close to breaking 50% in the Fenwick department, which means every single player is allowing the other team to take more shots while on the ice, and it's not really that close. If you compare the Sabres to one of the top teams in the league, say the Penguins, Pittsburgh only has one player (in 13+ games) who isn't over 50%. Heck, even the second worst Fenwick team in the league (Toronto) has one guy over 50%.

As a whole, the Sabres have only had two games in which they've out-Fenwicked their opponents, which might explain why they only have three wins. I realize that sometimes allowing your opponent to get more shots of lower quality is a viable strategy, but what the Sabres are doing is simply pathetic.

After seeing these numbers, Sabres fans, what (if anything) can be done to turn things around?

More from Die By The Blade: