A look at the scoring chances from the Sabres 4-3 overtime loss to the Leafs on Tuesday night.

Tracking scoring chances is a bit of a hobby for me. It helps me understand each game better when tracking how many scoring chances each team has. Last night was a perfect example of a game when scoring chances don't tell the entire story. The Sabres had more chances than the Leafs and yet they fell 4-3 in overtime in a game they probably should have won.

The Sabres seem to be a team that can't play both offense and defense in the same game. When they play a tight defensive style, they lack scoring chances. When they open things up, they allow plenty of chances. They allowed plenty of chances on Tuesday night and yet I believe they should have won the game. A couple of bounces didn't go their way, they lacked finish at times (Ott clear cut breakaway), and they didn't get a very good game from Ryan Miller. Those three important keys were the recipe for the Sabres fourth consecutive loss. 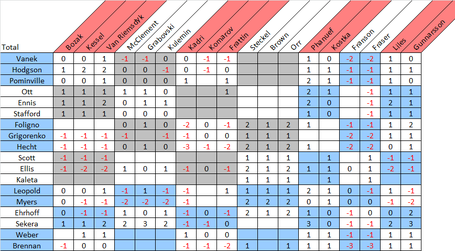