The Sabres are no longer among the unbeaten teams in the NHL after a disappointing effort in a 6-3 loss to the Carolina Hurricanes. The second period was once again the Sabres downfall as they gave up chance after chance and fell behind 4-2. The two goal lead proved to be too much for the Sabres to overcome despite an impressive third period.

Wondering how bad the second period was? Take a look at the scoring chances below. I promise they are as ugly as the 6-3 final score. 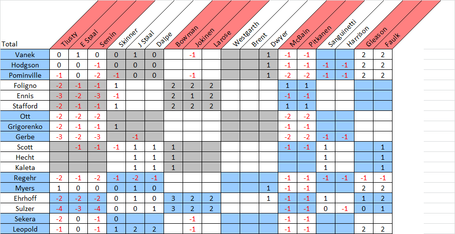 The chart above shows how the Sabres struggled against the Canes top line. This will have to change on Friday night if the Sabres hope to salvage a split with the Canes in back-to-back games. It is nice to see the Ennis line get some chances, but they need to start burying their opportunities. The team continues to rely on the Hodgson line to score goals.