The Buffalo Sabres looked like a team that was playing back-to-back games after one week of training camp. The Sabres played well defensively, but the offense was nothing to write home to mom about. The Sabres struggled to generate chances, but in the end it took only two goals to improve their record to 2-0-0 on the season. 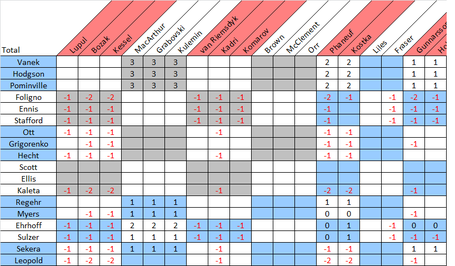 The chart above indicates the Pominville-Hodgson-Vanek line was the Sabres best line of the game and they had most of their success against the Leafs second line. The Foligno-Ennis-Stafford continues to struggle to generate offense and that led them to be on the minus side in this contest.