A New Look Quality Of Competition

Share All sharing options for: A New Look Quality Of Competition

The biggest struggle in hockey analytics is the mercurial nature of the metrics. You think you have a good handle on a certain statistic and as soon as you look up and take a breath, there is a revised (and ideally, improved) version of that statistic. Constant competition within the community means constant revision (and improvement), which means constant learning. There is nobody in the game that has learned all there is to know about advanced statistics. It is constantly evolving, the challenge is in keeping yourself on the leading edge of these statistics and experimenting and testing new ways to evaluate players, that's where you find value in these analytics.

There is nobody in the public field of hockey analytics that is pushing this leading edge more than Eric T. of NHL Numbers and Broad Street Hockey. Since the creation of NHL Numbers (or I should say, the evolution of NHL Numbers into a blog), Eric has been shaping the foundation of statistical analysis in hockey, from determining the value of neutral zone play to shooting down the general metrics measuring quality of competition. The latter is what we'll be focusing on today.

We will start off with some background information on the most commonly accepted measure of quality of competition, CorsiRelQOC. CorsiRelQOC stands for Corsi Relative Quality of Competition. CorsiRelQOC essentially accounts for the average CorsiRel rating of the opponents a certain player faces, normalized for head-to-head ice-time. If you're not sure what CorsiRel actually is, it's simply the change in shot differential once a player steps on the ice. More specifically, it tracks the change in the differential of shots attempted for (shots attempted means shots on net, shots missing the net, and blocked shots all combined) to shots attempts against while a certain player is on the ice versus when they're not on the ice. The reason for comparing shot differential while they're on the ice to while they're not on the ice is to minimize team effects. So to reiterate, each player has a CorsiRel rating and a player's CorsiRelQOC is the average CorsiRel of the players they face normalized for head-to-head ice-time. 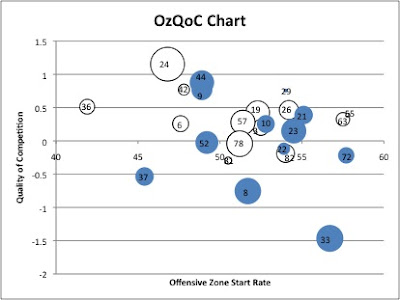 This is a pretty good system but there is certainly room for improvement. CorsiRel has its flaws and thus, CorsiRelQOC will have its flaws. So what's a better method for determining the quality of competition a player is facing? Of all the numbers that we track in hockey, what common thread do almost all top level players share across the board, forward or defenseman? The most popular answer, even amongst the most spirited stat geeks, is simply time on ice. Time on ice is a direct measure of a coaches opinion of a player and over a large sample size, that's probably going to be more accurate than any single measure we've come up with at this state of advanced analytics in hockey.

So the idea from there was to develop some kind of quality of competition metric using time on ice. The idea is simple; if a coach trusts a player then he will play him often. The best players will generally play the most. More specific to the metric we're trying to develop, top-pairing defensemen will almost always shoulder the heavy minutes against the opponents' top line. So by taking the average TOI of a player's competition, that should give us a pretty good idea of the real quality of competition they're facing.

So why does this time on ice metric give us a better idea of quality of competition than CorsiRelQOC?

Simple, if a top pairing defenseman is lined up against guys like Crosby, Stamkos, Datsyuk, and Sedin on a nightly basis, is it fair to expect them to win that shot battle on a consistent basis? Does it mean they failed if they lost that shot battle? Does it mean they're considered weak competition if the lose the shot battle to those guys? Of course not. However, if a top pairing defenseman faces those players on a regular basis, it is likely that his CorsiRel will not be very impressive and as such, a top line player like Crosby, Stamkos, or Sedin who faces these defenseman on a regular basis may not have a very notable CorsiRelQOC, despite facing top pairing defensemen night in and night out. A time on ice quality of competition metric effectively eliminates a lot of the inherent zone start and competition issues that come along with a shot-based statistic.

Though, on a player-by-player basis, time on ice may not be a perfect measure of quality of player, over the course of a season it is likely that the outliers will be averaged out. We saw an inherent flaw in CorsiRelQOC when dealing with top pairing or shutdown defensemen; there is no such flaw in TOI.

So this metric doesn't just tell us how strong any individual player's competition was, but also what type of competition they saw. The forward competition primarily tells us how a player's own coach tried to match him up while the defensive competition tells us how the other team planned against the player. Top two-way players like Pavel Datsyuk, Patrice Bergeron, and Mikko Koivu saw top defensive pairings from the other team due to their own offensive talents and their own coach also trusted them to go out and face the other team's top forward. Offensive specialists like Lupul, Sedin, and Ovechkin inevitably face top defensive pairings from the other team, but more often than not they did not face strong forwards. Defensive specialists like Jordan Staal, David Bolland, and Brandon Sutter faced top forward competition but did not face very good defensive pairings. This metric allows up to make that differentiation, something CorsiRelQOC does not allow. 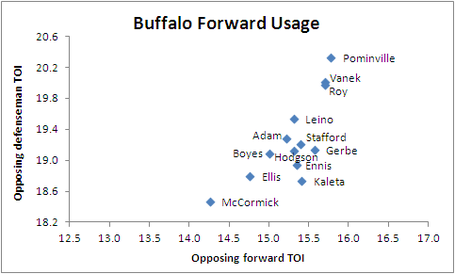 Keep in mind that everything is relative here. Just because nobody is technically in the top left of this graph, it does not mean nobody is an offensive specialist. It is highly unlikely that a player will be facing 21 minute per game defensemen (top pairings) while at the same time facing 13 minute per game forwards (3rd or 4th liners) as the top left corner would indicate. What you're looking for are players that deviate from the rest of the group. Unfortunately, this is not something that's prevalant in this plot but it is certainly something you'll find with other teams.

A lack of dispersion along the horizontal axis implies that Lindy Ruff did not rely heavily on a shutdown line nor does he heavily shelter any of his forwards. A clear indication of a shutdown line would be a pair or trio of players far to the right side of the horizontal axis, implying they faced very high quality forwards on a nightly basis. Instead, we see a very small range indicating that very little line matching occurred amongst the Sabres forwards.

It is clear that Vanek, Pominville, and Roy faced the most difficult competition, that should hardly come as a surprise. They faced top pairing defensemen on most nights and it appears Ruff employed a strength vs strength strategy in that his top players saw the opponent's top players on most occasions. CorsiRelQOC indicates that Nathan Gerbe faced the highest quality of competition; we can see from this chart that he did face relatively difficult forward competition but the defensemen matched up against him on most nights were more of the 4th/5th defender variety rather than the top pairing variety.

The Sabres TOI based quality of competition chart is relatively bland, no real noticeable trends jump out at you. I strongly recommend checking out the full list of all 30 teams' competition plots (via Eric T. at NHL Numbers). You can see the cluster of players come in all different shapes and sizes, each saying something different about not only the players, but also how the coaches managed their teams.

Hockey analytics is quickly gaining popularity, yet it's still at a point where it's manageable to begin learning some of these metrics from scratch. The lockout provides a great opportunity to catch up on some of the developments in hockey analytics so you're ready to go once the season kicks off.