The Best Of Jeanneret: The Final Four

Share All sharing options for: The Best Of Jeanneret: The Final Four

The Best of Rick Jeanneret is our summer quest to determine which of Jeanneret's most memorable calls ranks as the greatest of all time by ranking and voting on 16 of the best.

We're down to the Final Four in our Best of Rick Jeanneret bracket, but we have one thing to take care of before we can announce the last calls standing. Incredibly, as of this writing, we have a perfect tie between two iconic calls - "Top Shelf, Where Momma Hides The Cookies" and "La-la-la-la-la-la-LaFontaine" are sitting on exactly 50% of the vote, so head on over to this link if you haven't voted yet and cast your ballot.

The other matchups featured one other close call - the Shields/Snow goalie fight barely beat out "Roll The Highlight Film" - and two landslide victories for "May Day!" and "Now Do You Believe?" to round out the quarterfinals.

It should be an exciting battle this week between four tremendous Jeanneret calls, so make sure you help us break the tie so that we can start voting again tomorrow.

Check after the break for the updated bracket. 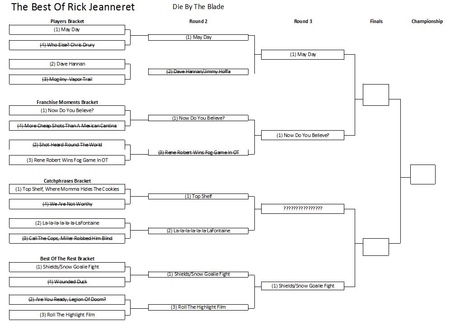