Share All sharing options for: Sab(re)metrics: Projecting A Grigorenko

Claimed to be a top 2 player by many scouting services as recently as February, the precipitous draft drop of Mikhail Grigorenko last Friday was quite a surprise. Without moving from their 12th overall pick, the Buffalo Sabres were able snag a top 3 forward talent who even has discussed playing in the NHL next season. Once the shock and amazement from the Buffalo Sabres' drafting of Mikhail Grigorenko had subsided, many fans began to speculate where and when he will play next season. Will Grigs make the jump to the NHL? Or will Mikhail benefit from another season with the Quebec Ramparts of the QMJHL? How many points could he score if he was to play in the NHL next season?

To answer these intriguing questions, projection and translation data compiled over at behindthenet.ca will be used to compare how other players have made the jump from junior and minor hockey leagues to the NHL. With the data presented, it can then be discussed if Grigorenko would benefit from either playing in the NHL or QMJHL next season. Interested? Come take the jump!

Before explaining how Mikhail Grigorenko would project for next season, the actual projection/translation method should be explained. Overall, it is pretty simple: behindthenet.ca used the point per game (PPG) of players who in one season were in a junior/minor league and the next season in the NHL and divided them to develop a rating that translated their performance. For more clarification, see the equation below: 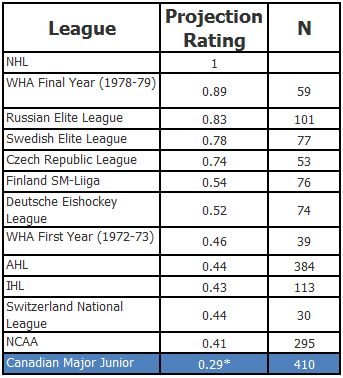 To project Mikhail Grigorenko's PPG, the highlighted section will be used. An asterisk is placed next to this number because it combines the projection rating of all three Major Junior Leagues in Canada (OHL, QMJHL, WHL) due to their relative similarity in rating (0.30, 0.28, 0.30, respectively). Using this data and Mikhail Grigorenko's statistics last season (59 GP, 40 G, 45 A), the system would project a NHL PPG of 0.418 for Grigs next season. This rate could project to the following stat line in a 82 game season:

For fun, let's examine what the Sabres' other first round pick, Zemgus Girgensons, could do next year if he does not make the team and plays for the University of Vermont Catamounts. Sadly, there is not a projection method for players who make the jump from the USHL to the NHL (too few data points), but behindthenet.ca has gathered information on the projection rating of USHL players who make the jump to the NCAA. According to their data, the projection rating would be 0.65; therefore using Girgensons stats from Dubuque (49 GP, 24 G, 31 A), his stats next season could look like this:

Getting back to Grigs, in accordance to the data from behind the net, Mikhail would score 34 points in his first NHL campaign. If this was to hold true, would you want him here? In my opinion, I wouldn't mind having Grigorenko get another year of seasoning in the minors since we have other centers on the team (Ennis, Hodgson, Roy) who would have better offensive statistics over an 82 game span. I also do not know want him playing fourth line minutes; that would be a complete waste. We could move him to wing or move a current center to wing, but is a projected 34 point season enough to do that? Do you think he will score more or less than 34 points in an 82 game season? Let me know your thoughts in the comments section below and poll below.