Flashback: At this time one month ago, the Buffalo Sabres had just traded Paul Gaustad, Zack Kassian, Marc-Andre Gragnani and a fourth round pick for Cody Hodgson, Alexander Sulzer and Nashville's first round pick. With 62 points under their belts, the team headed out West for what was deemed by some as the most important road trip of the season.

Present-day: With a 10-2-2 record since the trade deadline, the Sabres come into tonight's game in control of their own destiny. If the team wins out, they will be in as at least the 8th seed in the Eastern Conference going into the playoffs. Just think, if I polled the readers of this site a month ago, would any of you say we would be in this position?

I know I would have voted no; being a huge proponent of selling at the deadline, I figured this team was not good enough to make a playoff run this year. Of course my dreams of a top 5 pick have been destroyed, but as a diehard fan, I LOVE watching them win. Let's hope the boys can continue their good streak tonight in what easily can be called the most important game of the season.

Due to my restlessness about tonight, I created some updated OZQoC Charts for both the Sabres and Capitals in lieu of tonight's contest. If you are interested in some pretty bubble charts, come take a jump.

In case anyone forgot since last time, an OZQoC Chart is a graph developed by Rob Vollman (using data from Gabriel Desjardins' behindthenet.ca) that can be used to explain how forward and defensive players are being used by a coach in even strength situations (5-on-5) throughout the season. In this chart, the players who are getting "tough" minutes will be in the upper left corner, while player's getting softer or "easier" minutes will be in the lower right hand corner. The graph plots a player's Corsi Relative of Competition (Corsi Rel. QoC) versus a player's Offensive Zone Start Percentange (OZONE), with the bubble size being related to a player's Relative Corsi. If a player's Relative Corsi is positive, the bubble is blue; if negative, it is red. An explanation of each of these data types is below:

Now with some background information, let's take a look again at the Buffalo Sabres Forward and Defense OZQoC charts: 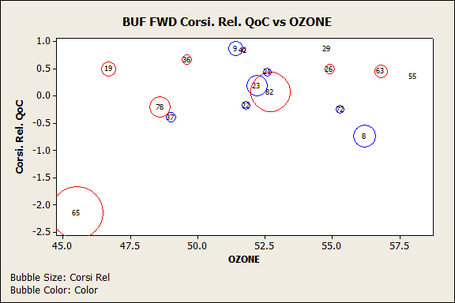 Since a few weeks ago, we can see that some significant changes have occurred; while some player's have been being played the same (Vanek, Ennis, Boyes, and Pominville), Cody Hodgson, Ville Leino, and Derek Roy are getting less offensive zone starts than before while Patrick Kaleta and Cody McCormick are clearly getting more. Travis Turnbull is starting the majority of the time in the defensive zone, but he is seeing very easy competition when on the ice. From the chart's current status, Cody Hodgson would be seeing the toughest minutes, while Cody McCormick and Luke Adam (when he was called up) are seeing the easiest minutes. 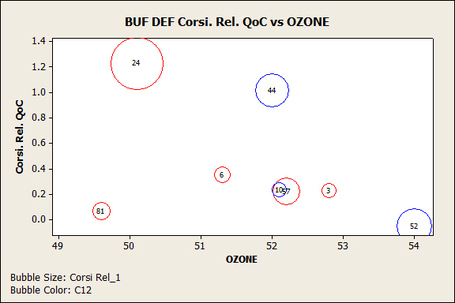 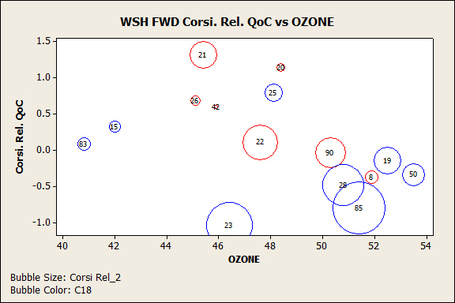 From the OZQoC Chart, it can clearly be seen that Washington gives Jay Beagle (83), Troy Brouwer (20), Jeff Halpern (15), Matt Hendricks (26), Brooks Laich (21), and Joel Ward (42) difficult minutes, while having their offensive players (Backstrom, Johansson, Ovechkin, Perreault, and Semin) see much easier minutes. Clearly, Washington utilizes their offensive talent so that they have the best chance to score when they are on the ice, as opposed to the Sabres "everyone must be defensively responsible" mentality. This chart shows Jason Chimera's (25) year as truly special, since he is having his highest goal scoring year of his career while not getting the sheltered minutes that the Caps top offensive players receive. 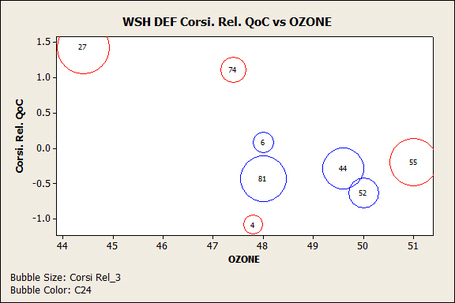 From the Caps DEF OZQoC Chart, it is noticeable that Karl Alzner (27) and John Carlson (74) play their toughest minutes, while Mike Green (52), Roman Hamrlik (44), and Jeff Schultz (55) see the easiest minutes on a night to night basis. John Erskine (4), Dmitri Orlov (81) and Dennis Wideman (6) have similar offensive zone start percentage, yet experience different levels of competition when on the ice. Washington's DEF chart does have similarities to the Sabres, in that both Dale Hunter and Lindy Ruff use one of their defensemen (Alzner and Regehr, respectively) in a purely defensive role when on the ice.

Overall, what does this mean for tonight? For the Sabres, you will probably see Kaleta, Gerbe (if suited), Regehr, and/or Sekera on the ice at all times if #8 is anywhere skating around. Hodgson and Roy may also see time against the Caps higher skilled players in the defensive zone since their starts in the offensive zone has been trending down in recent weeks.

For Washington, you will see Laich, Brouwer, Beagle and Hendricks with Karl Alzner and/or John Carlson playing against our high skilled forwards (Foligno-Ennis-Stafford, Leino-Roy-Pominville, Vanek-Hodgson-Tropp). Halpern has been a healthy scratch recently, and Joel Ward has been hurt for the last three games. Hunter will also try to get any of his skilled players on the ice against our more offensive oriented d-men (Ehrhoff, Leopold, Myers).

With the Caps having the last change, they will have the advantage with on-ice matchups tonight. Will this make a difference against a Sabres team that is scorching hot this past month? From my blue and gold tinted glasses, I hope not.