Sitting with your loved one at night, have you ever wondered how Lindy Ruff may use his players in even strength situations from game to game? Or if a certain player gets more offensive zone starts over another? Or does a certain player have to face tougher competition over a season? This may occur because:

Anyways, one really good way to figure this out is using an OzQoC (phonetically "Oz Coke") Chart, developed by Robert Vollman from Hockey Prospectus. For a better understanding of the OzQoc Chart and for some eye candy (i.e. bubble charts), come take the jump.

To understand how Ruff uses his forwards and defense in certain situations, the OzQoC chart plots the Relative Corsi Quality of Competition (y-axis) of a player versus their Offensive Zone Chart percentage (x-axis). In the version I am presenting today (as well as versions seen here and here), a bubble chart will be used to plot the Corsi Relative of each player examined. For a definition of each of these terms, read the list below (taken from behindthenet.ca):

The meaning of the OZQoC chart is quite simple; the players that play the most difficult minutes will be the in the top left (play in the defensive zone against the highest quality of competition) while players in the lower right will play easier minutes (get more offensive zone starts and play against easier competition). If you are interested in looking at some OzQoC charts from other teams, please take a look at Rob Vollman's Hockey Abstract site. The current OzQoc Charts for the Buffalo Sabres can be found below, broken into an analysis of forwards and an analysis of the defense. 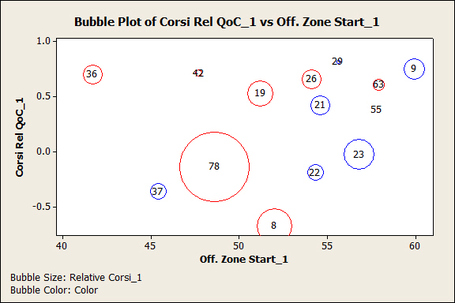 From above, Pat Kaleta and Nathan Gerbe are getting the most difficult competition and start the majority of time within their defensive zone. Paul Gaustad was also in this same area of the chart when he was playing a shut down line roll for the few weeks before his departure. The scoring forwards (9, 19, 21, 26, 29, and 63) are all facing good competition (the opposition's top lines), but they do it when starting the majority of the time within the opposing team's zone. This could be a results of Ruff expecting the players to be solid two-way players in his system. The fourth line players (8, 22, 37, 78) all play against weaker opponents, with Matt Ellis and Corey Tropp getting more starts in the defensive zone. This could have happened since the Tropp/Ellis/Boyes line is being used as a defensive line at times during recent games.

It is interesting to see the placement of Leino and Hecht on the OzQoC Chart. Leino seems to be protected like Brad Boyes; playing against lower level competition while getting their most starts within the offensive zone. Hecht on the other hand is one of our best defensive forwards, yet has been getting the majority of his zone starts within the offensive zone. 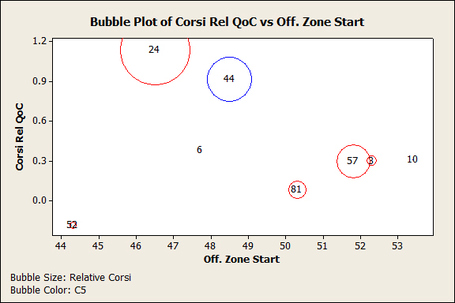 Ruff's use of the defense is more clear; Regehr, Sekera, and Weber see tougher minutes than the more offensive oriented D-men (Ehrhoff, Leopold and Myers). Brayden McNabb is somewhat protected as well (probably since he is a rookie), while Sulzer gets the majority of his playing time in the defensive zone against easier competition. Sekera's numbers from this chart are especially impressive since he still has a positive Relative Corsi while playing against the second toughest competition on the team and starting in the defensive zone for the majority of his playing time.

From the charts above, we can see that Lindy Ruff has certain designed roles for the players on the Buffalo Sabres. For example, some forwards get tough minutes against very good competition (Kaleta and Gerbe) while others are someone protected in their assignments (Leino and Boyes). The more offensively talented players are especially put in good situations, where they get a majority their starts within the offensive zone. They still need to have good defensive responsibility however since they still face a good quality of competition when on the ice.

For our defense, Ruff has explicitly selected our D-men as defensive (Regehr, Sekera, Weber) and offensive (Ehrhoff, Leopold, Myers) players who he will play accordingly. Rookies tend to have protected minutes, while 7th d-men will play against weaker competition and to their strengths. For example, Sulzer is getting the majority of his starts within the defensive zone, while M.A. Gragnani (not on chart) was getting started in the offensive zone the majority of the time while he was here.

Overall, the OzQoC Chart is a good tool in analyzing how a coach may use a certain player on a team. Just from plotting a few numbers, we can deduce how Ruff will use his players for a season. Next season, I would like to develop an animated OzQoC Chart, with each games information being recorded as a separate data point. This way, one can see how Ruff may change in using a certain player over an entire season, and possibly map a players progression or regression throughout an entire season.