On Tuesday night, I came to the realization that the Sabres just aren't good enough to make the playoffs this season. I don't know if it is a lack of talent, if it is lack of desire or if they aren't mentally strong enough; I just know they aren't good enough. They seemed to play a decent hockey game, save the penalty discrepancy, and they still came out on the short end.

The New Jersey Devils played an almost flawless game on Tuesday night and the exposed the Sabres deficiencies. The Sabres struggled to find space and seemed frustrated by the Devils smothering forecheck. The Devils were relentless in their pressure, limiting the Sabres offensive pressure and forcing them to make bad passes. It seemed that every pass was either an attempt to clear the zone or was a couple strides behind the attacking forward.

Unlike most games against New Jersey that are just plain boring, this game was extremely frustrating to watch as a Sabres fan. The team was clearly outmatched by New Jersey and the officiating just magnified the frustration. The Devils were 2-for-7 on the power play and the Sabres were only 0-for-2 with the man advantage. The frustration in the penalty discrepancy was not only evident from the fans behavior but also seemed to frustrate the Sabres. After a tripping call to Christian Ehrhoff he was seen mouthing the words "call it both ways to the referee".

When all is said and done, the Sabres didn't play as poorly as the 4-1 score indicates they did. They had to battle hard to generate scoring chances and they did actually have more chances at even strength. The game boiled down to one team taking more penalties than the other. New Jersey forced Buffalo to make mistakes and they made them pay for it.

Scoring Chances - after the game 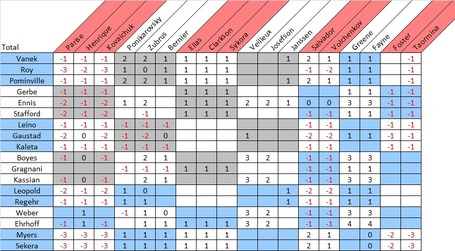