Share All sharing options for: Buffalo Sabres v. Dallas Stars - By the Numbers

The Buffalo Sabres played a great game and they were rewarded with a 3-2 shootout win against the Dallas Stars. It was one of those games when you felt like they were going to come out on the short end despite playing a really good hockey game.

Buffalo trailed 2-0 in the third period against a team that doesn't give up the lead very often. Thomas Vanek deflected a beautiful pass from Jason Pominville to get Buffalo on the board on a rare power play opportunity. Dallas looked like they were going to run out the clock, but Derek Roy punched in a rebound after a nice faceoff win by Paul Gaustad with under a minute left in regulation.

Buffalo looked like they were going to win in overtime but Kari Lehtonen made a miraculous save with one second left. After the near miss in overtime there was a feeling it wasn't meant to be for the Sabres but they eventually came through in the shootout to finish off a big win. 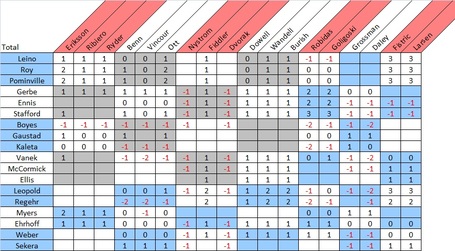