It feels good to do a post on scoring chances again. It feels even better, to do it after a Buffalo Sabres victory. Winning has not been easy for the Sabres this season but I believe they are on a two game winning streak at the present moment. Unfortunately the high powered New York Rangers come to town this evening.

I thought this was a good game for the Sabres. It is even more impressive when you realize they played most of the game without their best player. Thomas Vanek was hit with an impressive open ice check that sent him to the trainers room and he did not return.

I was especially impressed with a couple of the Sabres players that have been struggling this season (Ville Leino, Derek Roy and Drew Stafford). Maybe the all-star break allowed these players an opportunity to refill the tank and they will pick up their putrid offensive numbers in the second half of the season. 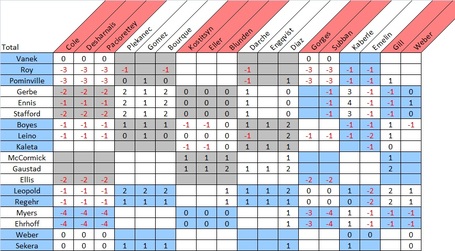