Share All sharing options for: Sab(re)metrics: Is Thomas Vanek Overpaid?

It has been a long time since I had posted to this site, and I apologize. Since my last posting, our fair Buffalo Sabres have accumulated a 9-18-4 record. Of course, this poses a few questions:

Is my lack of posting and the Sabres poor record a coincidence? More than likely.

Is all of this my fault? I sure hope not.

Can you blame their play on me? If that makes you feel better, go ahead.

Now that we have that out of way, onto my post. Last time on Sab(re)metrics, I discussed "How Good Is Thomas Vanek?" Analyzing his play since the Lockout using GVT and Even Stength Scoring per 60 minutes, it was concluded that Thomas Vanek is a top 30 forward in the NHL. While validating his offensive worth is noteworthy, the previous post did not analyze if his offensive production costs too much, if its a bargain, or if its just right. I find this important because I have heard the complaint (less this year) that,

"Thomas Vanek is horrible! He is not worth $7 million a year! Darcy does not know what he is doing....FIRE EVERYONE!!!"

Therefore, a statistical look at Vanek's worth is necessary to validate the 'truthiness' of the above claim. If you want to know if ATV's play is validated by his paycheck, come take the jump.

To compare Thomas Vanek's salary to other top forwards in the NHL, the following was completed:

1. The Salary Cap Hit and Total Salary accumulated for the top 50 forwards by GVT in the NHL since the lockout was compared to their GVT.

2. Contour plots that compare a player's total salary with their GVT and another stat, such as goals, and assists were developed to analyze multiple metrics to a player's salary.

To refresh your memory, the GVT (Goals Versus Threshold) stat represents how much better a certain player is over a replacement-level NHL player. Additional reading and explanation on the GVT can be read in this three part article by Tom Awad, who is also the developer of the stat(Part 1, Part 2, Part 3). To show the data used for this analysis, the top 50 forwards based on GVT, with their current Salary Cap Hit and Total Salary accumulated from 2005 - 2011 are listed below: 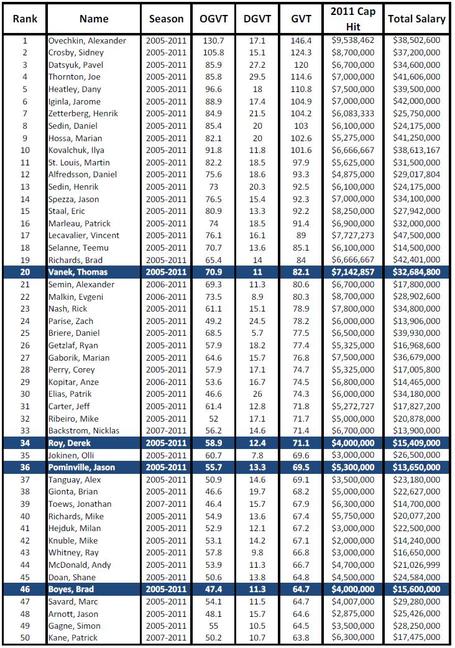 For the first analysis, the 2011 Salary Cap Hit and Total Salary of each player in the above list were plotted against their corresponding GVT since the 2004-2005 Lockout. These values were chosen because this is the only way to link a player's monetary value with their production and/or "irreplaceability" on the ice. Also, since GVT is calculated by using other offensive stats, it should be the best representation of how much a player's replace-ability compares to what they get paid.

The Total Salary since the Lockout was supplemented into the analysis since it is probably the best way to show how much those player GVT numbers cost over the time period of 2005-2011. Linear regression (black) and local regression (dotted blue line) or LOWESS smoother lines were placed on the graph to analyze the scatter plots. The linear equation and coefficient of determination (R-Sq) for both plots are listed on their graphs, while the degree of smoothing and number of steps for both LOWESS smoother plots were 0.5 and 2, respectively. If you are unfamilar with local regression techniques, this article on Wikipedia seems to do an admirable job in explaining the method. Also, all current Sabres players are green plot points in the scatter plots below: 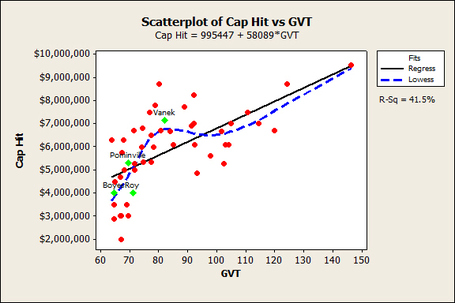 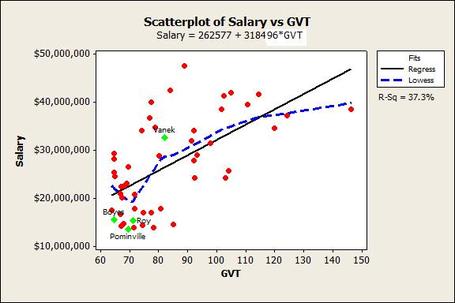 Observing both plots, it can be seen that the plotted data does not fit a linear regression model well, with poor R-sq values for both graphs. While there is a trend (a player who has a higher GVT will make more money), these salaries of these players are really all over the place. This is probably the case because:

Due to the poor fit of both plots to a linear regression, the LOWESS smoother plot was added to the graph. Using LOWESS brings a little more clarification to the data set, again re-emphasizing the trend stated before. The smoother also shows some interesting cases, such as the convex and concave bumps in the Cap Hit graph and Salary graphs, respectively. Both of these "bumps" can be explained by:

If Vanek's Cap Hit and Salary are examined in linear terms, Vanek "should" have a $5.765 million cap hit and have made $26.4 million in salary since the Lockout. Taking his entry level deal into account ($942,000 for his first two NHL years), this salary total would leave Vanek with a current salary cap hit of $6.129 million. Each of these calculated values are then 19.3% (Cap Hit) and 14.2% (Salary) greater than his current Cap Hit. Therefore, by analyzing GVT, Thomas Vanek would be overpaid (on a side note, all other current Sabres players are either underpaid or about right for their respective GVT totals when observing a linear analysis).

While this could be correct, there might be more metrics that could affect the pay of certain players. Therefore, some contour plots that compare a player's Cap Hit and Salary to their GVT and another metric (such as goals and assists) since the Lockout were developed and are shown below. 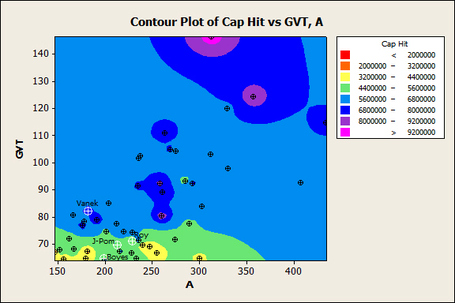 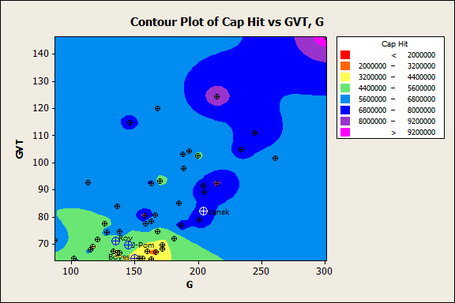 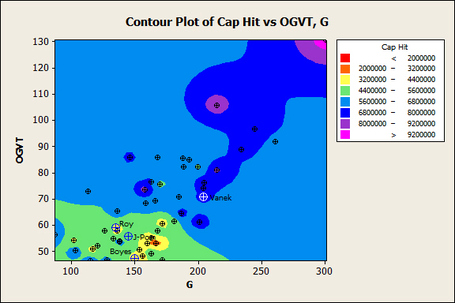 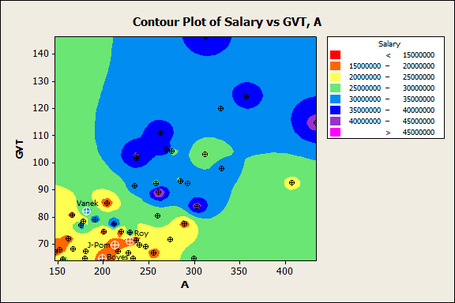 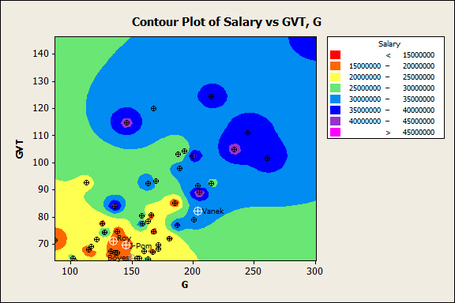 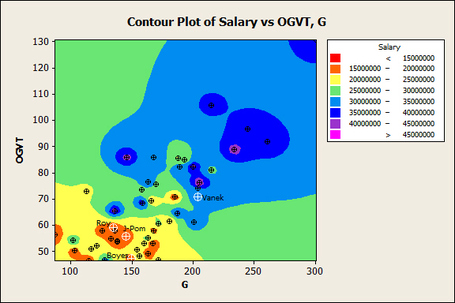 From the above contour plots, a trend still exists where players who score more goals and assists and have higher GVT's will have higher salaries. Looking purely at Thomas Vanek's Cap Hit and Salary, his monetary worth seems to be more justified by his OGVT and goals Scored stats than his assists numbers. In both OGVT and Goal charts above, Vanek fits within a fixed contour of the plot; in general, this shows that his pay is similar to player's around him with similar outputs, as opposed to being higher (or overpaid).

Of course, these are simple contour plots with ranges of Cap Hit and Salary, where a range of $1.2 and $5 million are covered by a single color. Therefore, it can be argued that the contour plots provide a simplified look at a the problem, and are not refined enough to validate any claims. While that can be assumed, the levels were chosen to add simplicity to the contour plots, since too many levels would make too many colors, and too few would generalize the plot. Overall, Vanek's salary made since the Lockout could be an acceptable amount when compared with GVT, OGVT, and goals data.

After completing the analysis, it shows that GMs probably have not used the GVT in their figuring of a player's salary. While it is arguably the best stat to analyze the "irreplacableness" of a player, it has only been around since about 2008; therefore, any contract signed before that year could possibly not match well to a Salary vs. GVT analysis. In summation, I think further analysis would need to be completed to really verify if Vanek is "overpaid" or in how a GM really values a certain player's monetary worth. While statistics are used in a contract negotiation, other variables attribute contract size, such as:

Using purely statistics, ATV's could possibly be justified to within $1 million Cap Hit and $2.5 million in Salary, but he probably would not have been overpaid at all if we did not have to match Edmonton's RFA deal to keep him. While statistics are the best measure of a players worth, they are not the only variable that is entered into a contract negotiation. Therefore, a true measure of a player's "worth" would have the include the stats they accumulate along with the three variables above in a weighted summation; this way would yield the most accurate value the player has to their contract.

I also would like to say that while I thought this was a good idea at first, I became uncomfortable justifying one of our best player's in this now dismal season by his monetary value. Whether he is slightly overpaid or the right deal, I personally think that is a keeper based on his statistical relevance to the team. Anyways, that is my personal view. Please tune in next time for: Sab(re)metrics: Mid-Season VUKOTA and SNEPSTS Review.