After holding a short press conference yesterday, team president Ted Black and GM Darcy Regier took their sledgehammers to a defenseless wall and ceremonially began the renovations to the bowels of HSBC Arena.

While speaking to the media, Black and the Sabres Director of Creative Services Frank Cravotta offered up a few details about the renovations. For starters, the Sabres new locker room will be circular instead of rectangular, to allow for better communication and to prevent players from "hiding in their phone booth," as Black put it.

A focal point of the renovations will be a sizable upgrade to the team's video facilities and capabilities, including a large theater for full team video sessions and a new coach's viewing area to watch video between periods.

The Sabres training equipment and work out space will also be upgraded, and the current fitness equipment has been moved to a temporary area so that players can continue to work out during the offseason. The coach's suites and player lounge will also be enhanced, with the player lounge growing by four times its current size -- something that might attract free agents, perhaps?

As for the actual construction, Black promised that the renovations would be done on time, and that the team would try to employ as many workers from Buffalo in the construction process as possible.

As for a price tag on the renovations, Black wouldn't commit to a number as plans haven't been finalized, but joked that if he could put the bill on his credit card, he'd earn over 6,000,000 airline miles. Check out the proposed plans after the break. 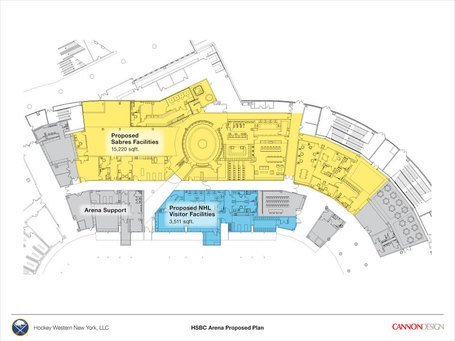 Plans courtesy of the Buffalo Sabres.