What a whirlwind of emotions this game was. There was a nervous energy prior to puck drop. That turned into cautious optimism when Tyler Ennis gave the Sabres a 1-0 lead with a bad angle shot that deflected off of Brian Boucher and into the net. It was a combination of elation and hilarity when Thomas Vanek gave the Sabres a 2-0 lead with another bad angle shot, this time from behind the goal line. When Marc-Andre Gragnani scored my mind started wandering to a potential second round opponent.

Unfortunately the Flyers were not ready to give up and the emotions swung in the other direction. The reaction on the Flyers first goal was a simple, that was bound to happen so just tighten up and win the game. When the Flyers narrowed the lead to 3-2 it was time to start panicking. "Come on Sabres, don't do this again".

The Sabres held the one goal lead into the third period and once again there was optimism in the air. The Flyers erased the optimism in relative short order by tying the game early in the period. I believe my exact words at that time were "I can't believe this is happening again".

Instead of crumbling under the intense pressure of losing a 3-0 lead, Tyler Ennis banged home a rebound to give the Sabres the all important 4-3 overtime victory. After the goal was scored there two reactions. Number one was "I love these guys" and number two was "how do I get my hands on tickets?"

Before we start looking forward to the Sabres giving us a Happy Easter, lets take a quick look back at the scoring chances in game five.

Late in the season we started a feature that tracked scoring chances. I've decided to continue doing the scoring chances post because many people like to track it. While this is a very subjective stat and is based mostly on my own opinion, I did use a criteria courtesy of The Copper and Blue. (Editors Note - The stats posted may not be entirely accurate due to distractions like drinking beer and yelling at the TV)

Here is the definition of a scoring chance via Copper and Blue...

Like many others that are using the app, a special thanks to Vic Ferrari for his hard work in creating this and many other apps.

This charts the chances for each team by period and by situation. Because we are tracking the numbers for the Sabres, they will be listed first and the opponent listed second.

This is an added feature that will show you how each player did against individual players from the opponent. Let me know what you think. 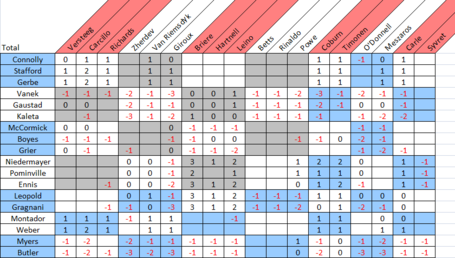