Share All sharing options for: Buffalo Sabres v. Philadelphia Flyers - By the Numbers

Another home game, another tough loss to swallow for the Sabres and their fans. The Sabres stormed out to an early 3-0 lead but the Flyers capitalized on a turnover and scored with one second left in the first period. That late goal turned the momentum of the game and the Sabres struggled to recover.

The second period has haunted the Sabres all season and tonight was the same old story. The Flyers scored three unanswered second period goals and took a 4-3 lead. The Flyers momentum seemed to come after Nathan Gerbe was taken into the boards by Marc-Andre Bourdon and Matt Ellis responded by challenging him. Ellis was assessed a minor and a 10 minute misconduct for instigating. The penalty not only meant the Sabres would not have a power play but they would be without Ellis for the remainder of the second period.

With Gerbe unable to return because of the injury and Ellis resigned to watching the rest of the period, the Flyers took control of the game.

The Flyers played an almost flawless third period but Drew Stafford tied the score with only 1:35 remaining to help the Sabres salvage at least one point in what amounted to another epic collapse. 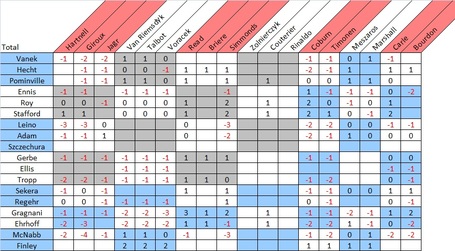